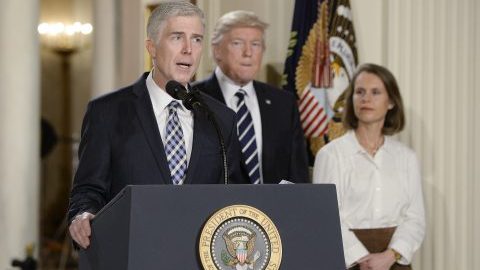 After a year of delays by Senate Republicans regarding Merrick Garland, the nominee of former President Barack Obama, Gorsuch offers plenty of views for University of Massachusetts students and faculty to be aware of.

“Gorsuch is going to be confirmed, or not confirmed, in the shadow of Merrick Garland,” said Paul Collins, professor and director of legal studies at UMass. “You’ll hear a lot of rhetoric about this being a ‘stolen seat.’”

While Gorsuch’s appointment has not yet been confirmed by the Senate, it does appear that a partisan duel may be on the horizon between Democrats and the present Republican majority.

Political climate and ideologies aside, Gorsuch boasts a résumé with degrees from Columbia University and Harvard Law School. Gorsuch also has 10 years of experience as a judge on the 10th Circuit Court of Appeals.

With this in mind, some UMass students feel there won’t be much backlash, especially considering the contentious nature of many of President Trump’s executive orders.

“I don’t believe there will be much student protest, not specifically regarding the Supreme Court nomination,” said Christopher Czepiel, a senior political science and communications major.

“UMass is certainly a liberal campus,” Czepiel added, “but I think there will be a stronger response to President Trump’s recent executive order, sometimes called the ‘Muslim ban.’”

Czepiel, a senator for the UMass Student Government Association, went on to add that he believes it was a “calculated move by the Trump administration to nominate a justice at this time.”

“[Gorsuch] is incredibly well-qualified and makes good on Trump’s promise to nominate a conservative to the Supreme Court,” Collins said. Recent protests in the Amherst area have been focused on the Trump administration’s immigration ban, which continues to dominate headlines days after its signing. Protests have been a near-daily event among the Five Colleges, with particular attention being drawn to the immigration ban and its impact on both students and faculty at UMass.

While recent executive orders may appear more contentious, Gorsuch’s nomination to the Supreme Court may have an impact that could last 30 or more years, as he is presently only 49 years old. Issues that affect many college students, such as affirmative action and abortion laws, could well be addressed in the coming years.

It is possible that Trump may nominate another justice in this term, as two of the eight current justices are over 80 years old. Such a nomination could tip the ideological balance of the court to make it more conservative than it has been in years.

“I have a lot of friends who could be very negatively affected by some of [Trump’s] policy changes,” Zouharis added.

Regarding the continuation of government partisanship in Washington, Collins said “this is going to be a very contentious era … if the Democrats take back Congress [in 2018], then everything changes.”