UMass softball prepares for a long, busy season in 2017 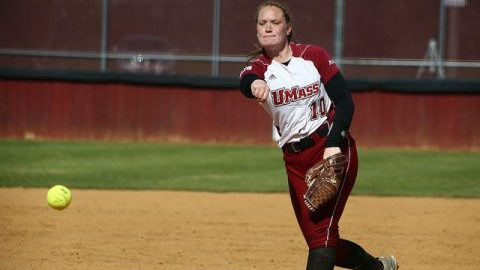 One weekend into the 2017 season, the Massachusetts softball team already has five games under its belt. But with more than 50 games on the schedule this year, there’s still a long way to go.

The Minutewomen (2-3) play one of the busiest schedules of any team at the University, routinely playing five games in one three-day tournament and double-headers as a part of three-game series during A-10 play, all making for one quick turnaround after another.

With such a grueling schedule, conditioning is huge.

“In the offseason, [conditioning] is our number one priority besides getting better at this game skill-wise,” UMass coach Kristi Stefanoni said. “If you are not in shape, physically, there is no way that you’re going to be able to make it the length of the season. Not just the length of the season, but an entire game. You’d be surprised how exhausted you get by being in a tough game, maybe an extra-inning game or a close game, and if you’re not in shape, you’ll never make it.”

“When we’re out of season we lift and we condition like three times a week,” Colleran said. “But now that we’re in season we only lift usually twice a week. As a pitching staff we’re usually doing some extra running, because in our position we need to make sure our legs are in decent shape. We usually condition as a team during practice, and most people are doing extra cardio to make sure we stay in shape.”

Despite the season kicking off last Friday, the Minutewomen are still making sure they stay in top shape to get through such a long season.

“I think a lot of people drop conditioning when the season starts,” Stefanoni said. “They’re like ‘well, you guys have a lot of games, you have quick turnarounds,’ and I don’t believe in that. We condition almost every day; we somehow incorporate it into practice. Sometimes it’s fun, sometimes it’s not fun. But it’s something that we do every day, because it’s going to be very important come April.”

Double-headers also make softball unique as—along with baseball—it’s one of the only sports that involve multiple games in a single day. Preparing for two games, especially during these early season tournaments against different opponents, can be tricky.

“It’s very difficult, because you have to prep for two different games,” Stafanoni said. “So for us right now, you’re prepping for two different teams in one day, once you get into conference it’ll be really easy, but right now we’re trying to prep to play Saint Francis at 12:30, and Baylor at 5:30, and have them just focus on one game at a time. It’s really difficult to plan for it, and it’s more difficult for the staff than for the team.”

The softball season also has a unique structure, with the early part of the season devoted solely to tournaments hosted by warm-weather schools. UMass spent last weekend in Florida, and will head to Texas, Mississippi and California before a pitch is thrown in Amherst.

After the tournaments, the Minutewomen play almost exclusively A-10 opponents, before the postseason rolls around in May.

“If you look at 50 games, it’s a lot, but you break it up into, almost, three different seasons. We have our pre-season, our tournaments we go into—it’s like 10 or 20 games—which is more manageable,” senior outfielder Caitlyn Hickey said. “Then you go into A-10 play, about 20 or 30 games, then you have postseason. When you divide it up that way, once you get to the postseason you’re not even tired, you’re pumped and ready to go.”

The busy schedule, with four to six games per week being the norm, can also make the season feel much shorter than the 55 games listed on the schedule.

55 games may seem daunting, but with their conditioning taken care of and Stefanoni at the helm, the Minutewomen look poised to make a run at A-10 title number 23, and the first of the Stefanoni era at UMass.

“I just want their eyes on the prize,” Stefanoni said, “which is an Atlantic-10 championship.”