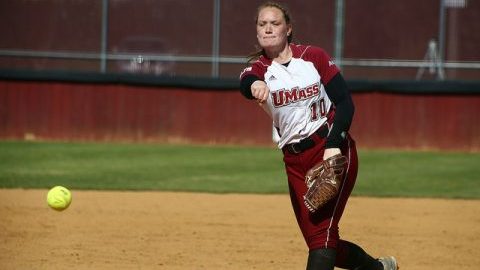 The Massachusetts softball team posted a 0-5 record over the weekend at the Baylor Invitational in Waco, Texas.

In the team’s second full tournament of the preseason, early kinks are still being worked out and adjustments are being made in preparation for the start of Atlantic 10 play Mar. 25.

“Overall, as a team we did not play good softball this weekend and it definitely showed,” UMass coach Kristi Stefanoni said.

In the highlight game of the weekend, the Minutewomen concluded tournament play with a rematch against Saint Francis.

After a 3-1 loss to the Red Flash on day one of play, UMass fell once again Sunday, dropping a contest it had an opportunity to win as it fell 5-4 in walk-off fashion.

The scoreless game was broken open by the Minutewomen in the top of the third, when three straight singles by freshman Madison Gimpl, freshman Candace Denis and sophomore Erin Stacevicz loaded the bases.

In the proceeding at-bat, Kaitlyn Stavinoha saw a pitch she liked and blasted a grand slam over the right field fence to give UMass a 4-0 lead.

“[She] had a fantastic game,” Stefanoni said of the sophomore. “She hit the grand slam, played phenomenal defense and had some really good at-bats.”

The team couldn’t maintain their mid-game advantage, though, as Saint Francis went on to score a combined five runs in the fifth and seventh innings.

UMass competed in two contests against Baylor and one against FIU Edwardsville prior to Sunday’s game.

The Minutewomen dropped both games against the Bears, 8-0 and 3-2, respectively.

After the first loss in which junior right-hander, Meg Colleran pitched 5.2 innings for the Minutewomen, Stefanoni looked to change things up a bit when the teams reconvened for a rematch the next day.

In her second freshman start, Denis got the ball for UMass, pitching six innings in a complete-game effort.

The Texas native only surrendered three runs to the high powered Baylor squad but two late tallies by the Minutewomen in the sixth weren’t enough to will a comeback.

Denis got the start in UMass’ 3-1 loss to Saint Francis as well, giving up four hits and three earned runs through six innings.

“I think that we saw a lot of good stuff out of [Denis] this weekend,” Stefanoni said. “She’s young and has a lot of work to do but these games are what she’s going to need to get through in order to find out what kind of pitcher she is and what she needs to improve.”

Ranked 24th in the Division I USA Today/National Fastpitch Coaches Association Poll, Stefanoni knows that the opportunity to match up with a top team like Baylor is only going to help UMass in the long run.

“It’s good for our learning process,” Stefanoni said. “It helps us understand where we are as a softball team and where we need to go from here if we are going to start competing with teams of [Top-25] caliber.”

In an 8-2 loss to FIU, Colleran got the start and threw 5.1 innings and allowed six runs. Senior Tara Klee and Stavinoha propelled what little offense the team could offer, and were both batted a run in in the game.

After a week of practice, which hopefully will take place outdoors, UMass looks ahead to Starkville, Mississippi, where it will partake in the Bulldog Slamboree from Mar. 3-5.