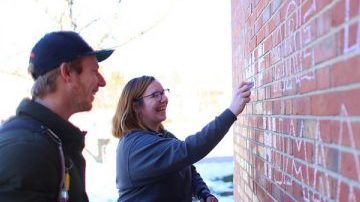 On Friday, Feb. 17, students and professors at the University of Massachusetts held a general “Student Strike for Sanctuary,” with many participants skipping class to further the recent, University-wide movement to make UMass a sanctuary campus for undocumented immigrants.

The main goal of the strike was to educate students on the dangers these individuals face in their daily lives and what routes students can take to help them.

An approximated 70 participants congregated in the lobby of the Student Union by 10:30 a.m. This number comes in contrast to the over 600 students who attended the sanctuary campus movement’s walk-out on Nov. 12. The number increased gradually over the course of the day however, with students trickling in and out of the building until its conclusion at 3 p.m.

Talya Sogoba, a junior journalism and African-American studies double major, and Morjane Hmaidi, a junior biochemistry and molecular biology major, were crouched on the floor at the start of the strike, contributing to an approximately 12-foot-long banner that students had written phrases on, such as “You are safe here,” “No human being is illegal” and “Abolish prisons and police.”

Hmaidi, who had skipped her cell-molecular biology course to attend the event, was working on a picture of three women, one white, one black and one wearing a hijab, with the phrase “We will always stand together,” surrounding them in big pink letters.

“I wanted to come out to show support for any immigrants or any coming students that come to the United States that we welcome everyone and anyone,” said Hmaidi. “And also just to say, as Muslims, we support every human being.”

The event was framed by organizers and activists as a teach-in. According to the Facebook page promoting the event, participating students sought to educate themselves on “how to join and strengthen existing direct action networks, how to establish and maintain one here on campus, and how to make our community a real sanctuary.”

“The goal of today is really about consolidating a sense of community, empowering people to understand ourselves as a community that can do things, regardless of whatever institutional support we have or do not have,” said Anna-Claire Simpson, a Ph.D. student in the English department and one of the strike’s main organizers. “This is an opportunity for [students] to learn how to mobilize moving forwards with their lives. Not everything is about a career,” she added.

The strike came amidst recent actions by the UMass administration to try and assist UMass immigrant students. This included the creation of an “Angel Fund,” a charitable fund proposed by the organizers of the sanctuary and implemented by Subbaswamy to support immigrant students, in addition to the Chancellor’s more recent creation of a task force chaired by John McCarthy, vice provost for graduate education and dean of the graduate school. The task force is composed of faculty, administrators and student alike, and “is coordinating responses to executive orders and changes in related federal policies.”

Celeste Blodgett, a junior psychology major and women’s studies minor, who skipped her interdisciplinary directions in psychology course to attend the strike, does not believe these actions are enough, however. Blodgett stated, “I believe that UMass and the administration need to put out the language that this is a sanctuary campus.”

“Them just saying that they are going to protect us is not enough. They need to say that ‘We are not going to work with ICE (U.S. Immigration and Customs Enforcement),’” Blodgett added. “They have the power to do it.”

Anthony Vitale, senior and president of the Student Government Association, who is on Subbaswamy’s task force, also attended the strike.

The strike’s events included a poetry recitation from Andrew Torres, a Ph.D. student in the social justice education program in the department of education, who talked about privilege, crime and police brutality, among a myriad of other sociological and political issues.

Other events included a workshop titled “Making Ourselves Ungovernable,” held by assistant professor of political science Angelica Bernal, as well as a workshop on direct action networks and U.S. immigration, held by representatives from the Pioneer Valley Workers Center, and a workshop on communalism, taught by Ph.D. student Eleanor Finley.

Prior to these workshops, a variety of speakers were brought to the center of the lobby at 12:02 p.m. to discuss their experiences as activists, immigrants and refugees.

Millicent Thayer, associate professor in the department of sociology, discussed the historical context of the current sanctuary campus movement, elaborating on similar pro-immigrant and pro-civil-liberties movements of the past, putting particular emphasis on the sanctuary movement of 1980s.

Thayer discussed how many activists during this time sought “to give shelter” to Central American refugees, who were fleeing from countries like Guatemala and Nicaragua, which were in severe “political upheaval.”

Followed by Thayer was Claudio Moreira, professor in the department of communication, who talked about his personal struggles as an immigrant from Brazil, and the hardships that he and many other immigrants feel in “belonging to a land.”

Moreira recalled his time in Brazil and how as an 11-year-old he received only half of the national minimum wage. He also discussed his struggle of feeling ostracized by his own country and simultaneously by his new one.

“We’re not scary, are we?” asked Moreira, referring to immigrants.

Edwin Murenzi, who is a Ph.D. and master’s student, and a departmental assistant in the department of veterinary and animal sciences, shared similar experiences of feeling ostracized by his own country, as both a refugee and in addition an immigrant.

Murenzi was born in Rwanda and fled with his parents to Uganda during the political turmoil of the 1990s that led to the Rwandan genocide. He talked about how his parents and siblings were forced to pose as Ugandans to stay in the country.

Murenzi also recalled a particularly emotional memory, where he was told to not eat fish from Lake Victoria, which borders both Uganda and Rwanda, because of the number of dead bodies that were being dumped into the lake from Rwanda.

Murenzi immigrated from Uganda to Japan shortly thereafter, and then from Japan to the United States, where he has lived for nine years, longer than any other country, he noted.

“I love this country,” Murenzi said, adding, “I’m as American as they come.”

However, Murenzi finds the current political climate in the U.S. “troubling,” and although he pays taxes, owns a car and is a full-time student, he still fears he will not be able to attain citizenship due to his F1-visa status and the immigration policies of the new presidential administration.

“I’ve never felt as unwelcome into this country as I do now,” said Murenzi.

Editor’s Note: The angel fund promised by Chancellor Subbaswamy was proposed by the organizers of the sanctuary.