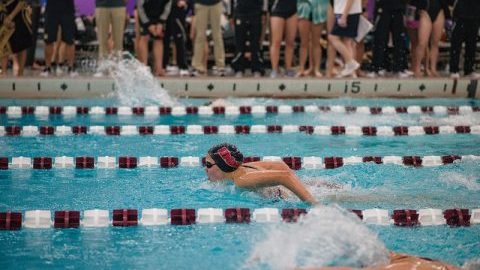 The Massachusetts men’s and women’s swimming and diving teams both finished third at the Atlantic 10 championships over the weekend in Geneva, Ohio.

The Minutemen concluded their four days of competition with 449 overall points, as their efforts in the pool were highlighted by several record-breaking performances.

Although the men couldn’t win their third A-10 title in as many years, UMass coach Russ Yarworth, who described the team’s performance as a little erratic, liked the effort he saw from his swimmers in the pool.

“Coming in third in the conference is a good accomplishment for the boys,” Yarworth said. “I was proud of the way that they stood up and performed all the way throughout the meet.”

Robert Barry took gold in the three-meter dive with a score of 297 in the finals, and teammates Trent Kindvall and Reece Donahue placed fourth and seventh, respectively.

The three had a major impact on the one-meter dive as well, garnering 54 total points from the event that helped the team jump from fourth to first place at the end of day two.

The 200 medley relay team of Kellen Gray, Al Madden, Kyle Stefanides and Ryan Pedrick set a new program record on day one, finishing with a time of 1:29.32 seconds.

Stefanides set an individual program record, swimming a time of 1:49.08 in the preliminaries for the 200 yard individual medley. In the finals, the sophomore finished eighth overall.

Gray finished fourth and fifth in the 100- and 200 -yard backstrokes, respectively, and helped his 200 -yard freestyle relay team of Pedrick, Stefanides and Owen Wright to a second-place finish in 1:21.06.

“He’s willing to do anything for the team,” Yarworth said of Gray. “We switched his events a week before the meet [from 50 freestyle to 100 -yard butterfly] and he took it right in stride. It was nice to see him succeed in a switch which he did completely for the team and not himself.”

Although UMass couldn’t capture its ultimate goal, the performance seen over the four days in Ohio showed promise for next season. Nearly all point-scores from this year’s A-10s will be returning, Yarworth relayed.

“We have a good core, but we need to grow up a little bit, mature as athletes and approach the offseason with a lot of intensity, desire and focus,” he said.

The Minutewomen fluctuated between the top three leaderboard spots throughout the four days, eventually placing third with 457 overall points.

“The team competed unbelievably well,” UMass coach Bob Newcomb said. “Everybody got up and gave everything they had.”

Ansley Baker and Meriza Werenski highlighted the action in the pool for Massachusetts.

Baker, a sophomore, was a key part in setting three program records.

The 200 medley relay team, swam by Baker, Maddie Biron, Chelsea Meiring and Rachel Grant, placed fourth in their competition and set a new school record in a time of 1:42.62.

Comprised of a freshman and three sophomores, the current relay group is one that has the chance of being together for two more years.

“They work so well together and really enjoy being with one another, they’re just going to continue to get faster,” Newcomb said.

Baker finished third in the 50 -yard freestyle with a 23.27—0the fastest she swam in her career.

“[Baker] works as hard as any athlete that I’ve ever seen so anything she gets in return is a direct result of the amount of effort she put in,” Newcomb said.

On the diving boards, Emma Roush led the diving team to success in the one and three -meter events, capturing gold in both.

In the one-meter, a score of 273 allowed the junior to take first for the third year in a row. Fellow Minutewomen Maja Boric, Katie Polk and Julia Jagannath also placed in the event, coming in third, fifth and sixth, respectively.

It was more of the same for the divers on the three-meter, capturing a total of 65 points in the event. Roush’s first place finish and score of 293.25 led the way. Polk finished third with a score of 274.65, followed by Jagannath and Boric in fourth and fifth.

Roush was named the Most Outstanding Diver for her efforts in the four day event. Undoubtedly, though, the success she has found at UMass would not be the same if it weren’t for diving coach Mandy Hixon.

“[Hixon] is one of the best coaches in all of college,” Newcomb said. “She’s developed athletes from raw talent with no background at all to all-American caliber, and that just doesn’t come with any coach. She develops athletes one after another and it’s so fun to watch them dive when they’re together.”