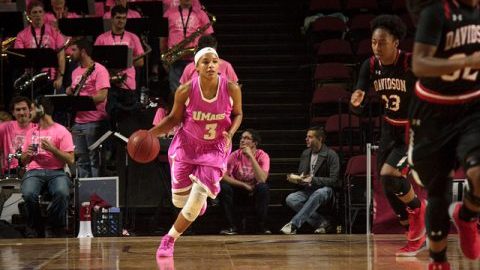 The Massachusetts women’s basketball team lost its eighth straight game on Wednesday at Richmond, 56-45, in a game that UMass never led.

After trailing by nine entering the fourth quarter, Minutewomen (9-18, 3-11 Atlantic 10) freshman Hailey Leidel hit a 3-pointer with six minutes, 27 seconds left in the game that briefly brought the deficit to four, but Spiders (13-14, 7-7 A-10) forward Ragan Wiseman hit a 3-pointer of her own on the ensuing possession.

Junior Maggie Mulligan made it a five-point game with a layup with 5:23 remaining on the following possession, but that proved to be the final UMass field goal of the game.

“But we’ve got to learn to be consistent and that’s something I’ve been preaching to our players all along. They have to understand it’s a 40-minute game and you have to play every possession like it’s a championship game.”

UMass trailed by one midway through the second quarter before an 8-0 run for Richmond flipped the game, giving the Spiders all the momentum.

Even when senior Alyx Stiff hit a 3-pointer to end a nearly five-minute scoreless stretch for the Minutewomen, Richmond answered right back with a 3-pointer from guard Lauren Tolson.

“That was where they were getting a bunch of points off just silly turnovers,” Verdi said of the Spiders’ 8-0 run. “We’ve got to be better passers. We’re making straight-line passes and defenses are reading it because we’re telegraphing passes, and they’re shooting gaps and getting a bunch of steals for easy baskets.”

The change in momentum brought on by Richmond’s points off turnovers really cost the Minutewomen, according to Verdi.

“It hurts, it hurts us because it deflates us,” he said. “When we’re scoring, we have momentum, we’re working hard, but when you give up — they’re high turnovers. High turnovers lead to easy baskets, and when you give them up, it definitely takes the air out of you.”

UMass outrebounded Richmond 38-36 and only lost the turnover battle 17-13, but it shot 29 percent from the field, compared to the Spiders’ 38 percent.

“We missed a lot of field goals right around the rim. We have to do a better job of finishing” Verdi said. “We’ve got to figure out a way to take advantage of certain things. Defenses are just playing off a couple of players, they’re sitting sometimes three of four people in the paint around Maggie, so our perimeter players need to do a better job of being ready shooters, catch, and being confident in knocking down jumpers.”

Mulligan shined for the Minutewomen in the loss, tallying a game-high in points (18) and rebounds (10), good for her 18th double-double of the season.

“I thought she was aggressive. We ran a lot of stuff to get her touches, as we do every single game, so Maggie’s done a really god job for us on the offensive end,” Verdi said.

After a slow start Leidel came alive in the second half, scoring nine of her 12 points over the final 20 minutes.

Freshman Jaide Hinds-Clarke stuffed the stat sheet for Richmond, leading the Spiders in points (11), rebounds (nine), blocks (three), and tied for a team-high in steals (three).

UMass will look to snap its losing streak Sunday when it hosts La Salle on Sunday for Senior Day. Seniors Stiff and recently-appointed captain Megan Burke will be honored before the game.

Tipoff is scheduled for 1 p.m.