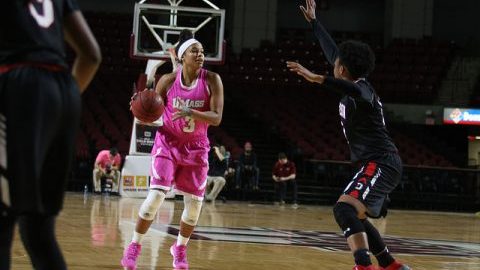 Bearing the heavy burden of a seven-game losing streak, the Massachusetts women’s basketball team looks ahead to its last three conference games of the season, commencing with a trip to Virginia to take on Richmond.

The Minutewomen (9-17, 3-10 Atlantic10) are coming off a harsh loss to Fordham Saturday after being held to less than 10 points in the first and third quarter. The Rams were also able to accumulate 16 points off of UMass turnovers.

“It was a tale of two halves,” UMass coach Tori Verdi said. “I thought that we did some good things in the first half but for the second half, for whatever reason, we weren’t disciplined.”

Verdi acknowledged Fordham’s successful program but still felt as though his team got outworked and out-toughed. He took notice to his team’s need to “have a better sense of pride.”

“We have to pick up our intensity in the game,” freshman guard Ryan Holder said. “We’re working hard in practice and we need to carry that over into the game.”

Despite being ranked just three spots above UMass in the A-10 standings, the Spiders (12-14, 6-7 A-10) have played particularly well on the defensive end. Richmond leads the conference in turnover margin (2.73+) and are second in steals (210).

The Spiders also rank third in the A-10 for scoring defense (58.0 points per game) which punches in at 44th in the nation. To go hand-in-hand with that, they place second in the league and 30th in the nation for 3-point field goal defense as well (.277).

Verdi is cognizant of the skill level of Richmond but is focusing more on internal improvement for the struggling Minutewomen.

“Right now, it’s about us,” Verdi said. “It’s not about our opponent. We have to understand who we’re playing for and understand that there’s a sense of pride there.”

The Spiders have been trading wins and losses since their last losing streak on Jan. 25 against Duquesne.

Earlier in the week Richmond redeemed themselves against George Mason after losing by a heartbreaking four points earlier in the season on Jan. 22. The win became a blowout in the fourth quarter anchored by 19 points from senior guard Janelle Hubbard, who surpassed her average of 14.2 points per game.

Richmond’s junior Kylie Murphree has dished out 110 assists in 26 games this season, after coming off a team-best and career-high 105 assists last season. Murphree sits just three spots below UMass captain Leah McDerment, who has 137 assists so far, in assists per game. McDerment averages 5.3 per game, while Murphree averages 4.2.

The matchup will serve as this season’s annual breast cancer awareness “pink” game. The game could also count as Richmond’s head coach  Michael Shafer’s final win, qualifying him as the first coach in the program’s history to reach the 200-win milestone.

Verdi described his team’s next three matchups as “very winnable games.” His goal is to approach each and every single one of them with the mindset that they can win. Regardless of what time in the season it is, Verdi expects his players to be playing the full 40 minutes with 100 percent effort.

“Hopefully, we have sense of urgency,” Verdi said. “That’s what I’m looking for.”