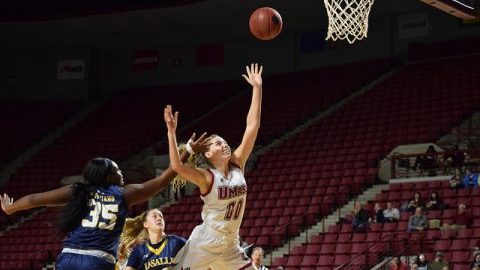 Maggie Mulligan (00) scores a basket during the game against La Salle at the Mullins Center on 2/19. Katherine Mayo/Daily Collegian)

The Massachusetts women’s basketball team’s season came to a disappointing end Sunday, as the Minutewomen fell in the first round of the Atlantic 10 tournament to Saint Louis, 91-51.

The fourth-seeded Billikens entered the tournament as the top scoring team in the A-10, averaging 74.6 points per game, and showed why they finished the season at the top of that category. They shot 55.6 percent from the field today and 52.2 percent from behind the arc, looking near unstoppable on the offensive end of the court. The 91 points scored wasn’t their highest total of the season, scoring 106 earlier in the season against Davidson.

SLU (23-7, 12-4 A-10) had a balanced scoring attack, with five players scoring in double digits. Guard Jackie Kemph led the way with a game-high 20 points on 7-for-9 shooting. The junior also added nine assists and four steals.

“We just stopped executing defensively,” UMass coach Tori Verdi said after the game. “We didn’t play personnel the way we should have and this is a high scoring team. They’re averaging 75 points per game and if you allow them to shoot open shots, they make you pay. I thought they did a good job of collapsing our defense and kicking it out to open shooters.”

Aside from the defensive struggles, the Minutewomen offense never found consistency in its rhythm throughout the contest, shooting just 35.2 percent from the field. UMass was able to keep the game close in the beginning, holding a 10-9 lead with 5:09 remaining in the first quarter.

From there, the offense got into a slump, and the game quickly got out of hand with the Billikens starting the second on a 25-7 run, out-scoring the Minutewomen 32-15 in the quarter, which led to a 48-25 lead at halftime.

“I thought we came out and for the most part we were executing good on what we were supposed to be doing,” Verdi said. “And then we just stopped scoring and the lead started to bloom a little bit and get away from us.”

The second half wasn’t much better for UMass. SLU continued to extend its lead, starting the quarter on a 16-4 run. The Minutewomen went into the fourth quarter trailing by 30, and by that time, the game was long over.

“Obviously it’s a sour one because each and every single game I want us to play to the best of our abilities,” Verdi said. “We didn’t do that here today at all whatsoever.”

“That’s the part that’s disappointing,” Verdi added. “I wish we would have played better but we didn’t.”

While the season didn’t go the way the Minutewomen would have liked, there is still hope for next season. Verdi has had the opportunity to recruit players to fill their next season, while the team is only graduating two seniors.

“[We’re] definitely looking forward to next year with all the new faces that we’re bringing in,” Verdi said. “We’re bringing in highly skilled players who I think will impact the program right away.”

Thomas Johnston can be reached at [email protected], and followed on twitter @TJ__Johnston.