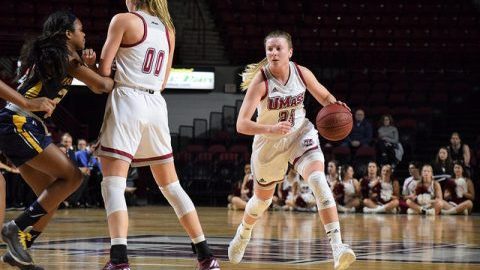 It was a familiar story for the Massachusetts women’s basketball team, as it lost its ninth-consecutive game Sunday, falling to La Salle 57-52.

The Minutewomen (9-19, 3-12 Atlantic 10) dug themselves a first-half hole yet again, and a late comeback fell short as the Explorers (16-11, 9-6 A-10) rode huge advantages in rebounding and bench scoring to a win at Mullins Center.

“The word that comes to mind is inconsistency,” UMass coach Tory Verdi said, “especially on the defensive end. We were executing pretty well offensively against man, then they go zone, we get wide open shots and we miss them.”

Junior center Maggie Mulligan racked up 18 points and 14 rebounds to post her 19th double-double of the season, but her performance couldn’t save the Minutewomen. It was another tough day for UMass’ best outside shooters, freshman Hailey Leidel and senior Alyx Stiff, as the Minutewomen only knocked down one 3-pointer all afternoon.

“We need more scoring production from Alyx Stiff and Hailey Leidel,” Verdi said. “They both had open looks, their job is to knock down shots, and they didn’t go down today. So obviously that puts a little more pressure on everyone else, but we can’t allow our lack of execution on the offensive end to affect us defensively.”

UMass jumped out to a 16-8 lead early in the first quarter, but La Salle quickly erased that deficit and used a big second quarter to take a 37-27 lead at the half.

An even third quarter left the Minutewomen still down by 10 heading into the fourth, where they finally showed signs of life. Mulligan’s jumper with 2:31 to go cut La Salle’s lead to 56-52, but that was as close things would get.

“I thought that we played really hard,” junior guard Leah McDerment said, “but they just ran away with it in the end. We made a couple mistakes, a couple turnovers that cost us the game really. It came down to the last few minutes but it’s stuff throughout the game that we need to clamp down on so it doesn’t come down to the last minute.”

A series of turnovers and forced shots stifled any UMass comeback, and a nightmarish final possession culminated in a rushed fade away from McDerment, that left the Explorers with the ball and a tenth of a second to dribble out.

UMass took a beating off the bench and on the glass, with La Salle holding an incredible 42-2 bench scoring advantage, while out-rebounding the Minutewomen 43-29. Sofilia Ngwafang and Anemone Scheel had 17 and 13 points, respectively, coming off the bench to lead their team in scoring. Meanwhile, the Explorers’ rebounding advantage led to a 19-2 gap in second-chance points.

As has been the case all season, Verdi was working with a short bench, with only seven players seeing court time and five having to play at least 30 minutes Sunday. With a short bench comes fatigue, and that has become increasingly evident through this current nine-game skid.

“Fatigue has been an issue all year long when you don’t have numbers,” Verdi said. “When you look at what [other teams] are able to do with points off the bench and what we’re able to do, obviously it’s an area that we’re going to address in the offseason.”

For now, UMass just has one game left on the season, heading to Rhode Island Wednesday for the 2016-17 season finale. The Minutewomen hope to secure a win against URI, looking to avoid entering the A-10 tournament on a 10-game losing streak.

“I think that we know we have one more game,” McDerment said, “and we want to go out strong so that we can head into the tournament and make teams cautious to play against us. Everybody has said that despite the outcome of the game, we’re a very tough team to play against, so I think we just have to keep that and leave it all on the floor.”