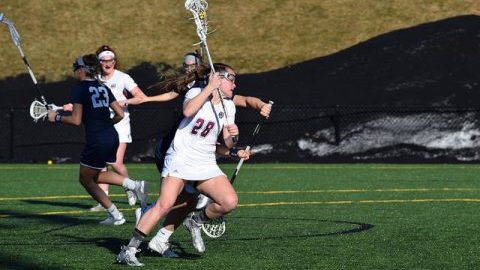 Defense is an aspect of the game the Massachusetts women’s lacrosse team has prided itself on season after season. Coming off an impressive campaign in 2016, all eyes are on the up-and-coming 2017 defensive unit.

The Minutewomen (1-2) finished last season 20-2, going undefeated in conference play (9-0) and making it all the way to the Elite Eight of the NCAA tournament. Their conference play was highlighted by the team’s ability to keep all but one of their opponents under 10 goals.

“I think that our defense takes a lot of ownership and pride in playing together as a unit,” UMass coach Angela McMahon said. “The younger players really buy into that early on.”

The Minutewomen opened this season with two back-to-back losses against Boston College (18-10) and Colorado (11-7), but earned their first win of the season in a 14-13 win at Jacksonville last Sunday. Coming off a season with two losses in total, this is not the way UMass usually starts.

“We’ve never gone undefeated since I’ve been here, so we’ve lost games,” McMahon said. “Defense is something we’ve always taken a lot of pride in, it’s always been our strong suit no matter who it’s been.”

McMahon’s defensive unit last year, consisting of graduates Amber Tobin, Anne Farnham and Kate Farnham, helped anchor a team that averaged 7.09 goals against per game. The question remains if the newest rotation of defenders will be able to maintain such a strong presence.

McMahon described the first couple of games without her former defensive group as “different.” Though the seventh-year head coach made a point to say it was neither a bad nor a good different.

“We have different types of players that are stronger in different areas,” McMahon said. “I’d say yes it’s noticeable, but not that I think we’ve necessarily had any sort of drop off, it’s just a different style of play.”

The Farnham twins left all of their defensive talent to speak for itself in the box scores. Anne finished last season with a team-high 46 groundballs. Kate trailed right behind her sister, tying for the second-most groundballs with 44. Kate also lead the team in caused turnovers, with 33.

Senior defender Taylor Fischer looks at her former teammates graduating as an obvious loss, though her faith in the players who have recently been stepping up keeps her optimistic about the season.

“We definitely adjusted quickly as a defensive unit,” Fischer said. “A lot of underclassman stepped up, which has had a huge positive impact on the team.”

The New York native also pointed out her coach’s decision to shift around their defense formation to adapt to the team’s new strengths and weaknesses.

“I definitely felt pressure [during] my first career start,” Fischer recalled. “Our team is really good about blocking out the noise and just focusing on what’s in front of us in that game and in that moment.”

Ryan started all 22 games in her junior season while simultaneously transitioning from a midfielder to a defender. She finished last season with 13 ground balls, 16 caused turnovers and 10 draw controls while also scoring a goal.

“Transitioning was a very interesting experience,” Ryan said. “People like Taylor, Amber Tobin and the Farnham twins made it really easy. They helped me, pulled me aside and made things a lot easier for myself.”

Ryan described Tobin and the Farnham twins’ absence having been “difficult at points,” but the players who have been stepping up have been “finding a role for themselves and doing unbelievably.”

“What we’ve already seen from them is them stepping up as leaders both on the field and off the field,” McMahon said of Fischer and Ryan. “Vocally, they’re just always getting the team together and getting them going, but also just being vocal in their support of all their teammates.”

McMahon referred to the pair as “on-field coaches” that have the respect from all of their teammates because of their respective careers at UMass.

“The team respects them as leaders,” McMahon said. “I’m just really excited for them and hope they have their best year yet as seniors.”

Fischer made a point to praise the Minutewomen’s overall fitness. She believes last season there were individuals on the team who were more athletic than others, but now the whole team has reached the same level.

“That’s really big when it comes to ground balls and ball controls, those 50/50 things that matter and could be the game-changer,” Fischer said.

McMahon mentioned UMass’ focus is on “the game within the game,” referring to improving draw controls, possessions and the team’s shots. She believes that given the length of the season, improving and developing players along the way is what’s crucial to their success.

“I think since the Boston College game, we’ve done just that,” McMahon said of the player progression. “We’ve steadily improved each and every time we’ve stepped out on the field.”

With that being said, both Ryan and Fischer hope to see the Minutewomen go the furthest in the postseason the program has ever gone.

Fischer believes in not thinking too far ahead and taking each game one by one as they come. Though she admitted the Atlantic 10 championship was in the back of her mind.

Before the Minutewomen come anywhere close to the A-10 championship, the new defensive unit will have to uphold its reputation.

“Critical,” said McMahon, when asked how important defense will be this season. “It’s about putting the focus on everyone contributing, all seven players in the unit, we always have to play as a team.”