Valentine’s Day is a time to remember sacrifice 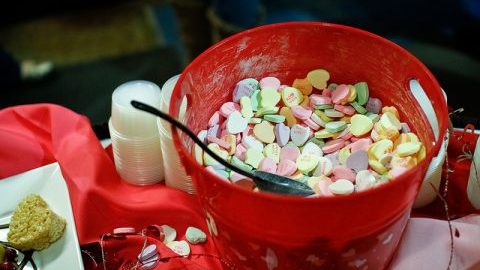 Valentine’s Day is one of those holidays that is either ardently loved or passionately hated. My suitemate calls it a “Hallmark holiday,” and it does sometimes feel like it’s just another way for the business industry to suck people dry financially, especially because many people get offended when their partner doesn’t plan something special for them. Many others are, in my opinion, irrationally upset when they feel they have nobody to share the day with.

It seems the question of how it all started is still quite in the air. The Catholic church is said to celebrate multiple saints named Valentine. All of them supposedly died for ethical causes.

The Saint Valentine I’ve heard talked about most is the one who supposedly disobeyed the Roman Emperor Claudius II. Apparently, Claudius thought marriage weakened a man’s military performance, so he outlawed marriage for young men of a certain age. But St. Valentine continued officiating private ceremonies for young couples, despite the consequences. Claudius found out and St. Valentine was beheaded Feb. 14. Another legend says that St. Valentine was executed for helping incarcerated Christians flee treacherously-abusive Roman jails. Some tales claim the saint himself was a prisoner and sent a letter to his beloved, signing it “From Your Valentine,” creating the first official valentine souvenir.

Regardless of which legend you favor, you will always have someone to celebrate Valentine’s Day with if you know at least one of the stories, or if you’ve had trials that made your relationships with certain people stronger.

Media propaganda—Kay Jewelers commercials are in the lead—has limited consumers’ options, making us believe we’re sore losers if we’re still single by that special day. But the real purpose behind the holiday is actually much more narrow than perceived. St. Valentine wasn’t made a symbol for a cute crush on some random kid in one of your classes. He symbolized love that comes with consequences, forcing someone to make sacrifices. We all have somebody who has given something for our sake.

That could mean your parents or grandparents sacrificing their own dreams so you could actually live a blissful reality rather than only dreaming of one. My grandmother could have been murdered for doing a sit-in during the civil rights movement. But she did it with the hopes that her descendants wouldn’t have to. It can mean one person taking extra hours at work to buy something the other may or may not even need. My mom worked crazy shifts at a hospital when I was in middle school, so I’d have new sneakers every now and again.

If your relationship has been contingent upon one of you putting up with nonsense, then there goes a valentine. If one partner isn’t always treated well by the in-laws, yet, they find it in them to persevere, there goes another valentine.

It even took me a long time to see beyond the shallowness of how to celebrate Valentine’s Day in line with pop culture. Most of my family is still learning to appreciate my grandparents’ sacrifices, but I think broadening the horizons comes with time and maturity. If you’ve heard your elders say people are more than what they appear, I’ll add that life is, too.