Wins continue to elude UMass hockey team after losing 4-2 to No. 9 UMass Lowell 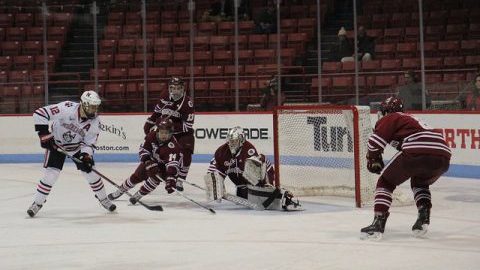 The Massachusetts hockey team will have to wait another year for a chance at attaining the Alumni Cup.

UMass (5-23-2, 2-15-1 Hockey East Association) succumbed to No. 9 UMass Lowell 4-2 Saturday night, giving the Riverhawks (19-9-3, 11-7-1 HEA) the Alumni Cup, the award given to the winner of a three-game season set between the two Massachusetts State System Division I hockey programs, for the sixth consecutive season.

With a 2-2 score heading into the third period, UML cashed in for two goals in the final 20 minutes to pull away with the victory.

The first goal came off a wraparound stuff-in attempt by senior Joe Gambardella that squeaked in, to give the Riverhawks a 3-2 advantage. Sophomore Connor Wilson padded the lead with a power play snipe from the left half-wall for the second UML goal of the period to push the Minutemen’s losing streak to 11 games.

“I thought tonight we came out and Lowell took it to us for the first 10 minutes of the game,” UMass coach Greg Carvel said. “Luckily Alex Wakaluk was really good in net tonight.”

The senior goaltender made his first start of the season Saturday night at the Tsongas Center and impressed Carvel with his stout play.

“[Wakaluk] made a lot of big saves, made some big saves look easy,” Carvel said. “God bless him. He came in last night [against Northeastern] when we were down 4-0 and he came in and evened the game out for us. He did the same thing tonight. We haven’t had that in a goaltender for us in a stretch.”

Wakaluk was shelled by the Riverhawks, finishing the contest with 35 saves.

“He battles every day, battles in practice every day, he’s a great guy,” assistant captain Dominic Trento said. “I’m happy for him. Tonight he kept kicking all night long and that’s good to see.”

“We’ve lost a bunch of games in a row, [and] if we would’ve had the goaltending we had tonight, we probably would’ve found a way to win one of those games in that stretch,” Carvel added.

During this current winless streak, a combination of factors have prevented the Minutemen from earning a win. Goaltending hasn’t been as strong as it was to start the year, goals have been scarce and special teams haven’t been effective enough to keep UMass in close battles.

Saturday night, Carvel noted the man-advantage for UML, and UMass’ inability to contain it, as the biggest reason for the loss.

“Their power play is really good,” Carvel said. “It’s not overly creative but they screen the goalie real well. They move the puck around until they get a good shot. They’re very good on the power play from what I’ve seen throughout the year.”

The Riverhawks first marker came just minutes after the Minutemen killed off their first penalty when senior Dylan Zink smashed in a one-timer at 12:30 of the first period. Then, UML scored their first on the man-advantage when senior Michael Kapla let a hard wrist shot go at 9:30 of the second period. The final Riverhawks powerplay goal was had by Wilson after UMass forward Ray Pigozzi was ejected following a hit-from-behind penalty.

“I think special teams were the difference in that one,” Trento said. “That’s tough when you get odd-man especially with such a talented team over there. We would’ve liked to see it five-on-five because I think we would’ve had the best of them for most of that.”

The Minutemen’s two goals were from freshmen Niko Hildenbrand and Jack Suter that kept the game interesting through two periods, however UML’s red-hot power play (37-138 for 26.8 percent; ranked third best in the country and second best in HEA before Saturday’s matchup) combined with its top players coming through in the clutch proved to be too much for a lowly UMass team.

“I thought we battled hard,” Trento said. “I think in the first 10 minutes they put the pressure on us but I think we settled in. It’s a top team in the country and we battled for 50 minutes and unfortunately we didn’t come out with the win, so it’s tough.”

Next up for the Minutemen is a date with Merrimack College Tuesday night at Mullins.