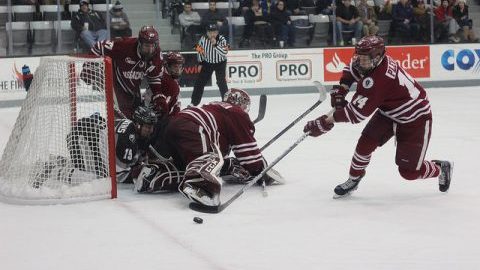 PROVIDENCE – The Massachusetts hockey team failed to get into any kind of a rhythm in its 17th consecutive and season-ending defeat Saturday night at Schneider Arena.

No. 10/11 Providence College (22-9-5) flexed its muscles and swept UMass (5-29-2) from the opening round of the Hockey East playoffs with a 5-1 triumph and advanced to the second round of the conference tournament.

The Friars struck first at 8:54 of the first period after Niko Hildenbrand was called for interference with just over 13 minutes to play in the opening period. PC took a 1-0 lead after Brian Pinho found Scott Conway in the right faceoff circle, who fired a slap shot that snuck just inside the crossbar over goaltender Ryan Wischow’s glove.

PC outshot the Minutemen 15-7 in the second period and 35-21 in the contest, and for the first time all series proved its overpowering talent was too much to bare. Vimal Sukumaran tipped a centering pass from defenseman Jacob Bryson into the back of the net to push the Friar lead to 2-0 with 17:55 to play in the second.

Conor MacPhee put one through Wischow’s legs on a 2-on-1 to extend the PC lead to three with just under five minutes to play in the middle period and effectively ended any hopes of a UMass comeback.

“We played our best the last two periods,” PC coach Nate Leaman said. “Beating any team four times in a row, I give the guys a lot of credit because that’s difficult. We stayed with it and played a good game tonight. I was really proud of the effort.”

“I thought we came out with good energy and good intentions,” Minutemen coach Greg Carvel said. “We really wanted to score the first goal tonight to try and to give us some life and some hope.”

“They became too much. They’re a big, heavy defensive team. It felt like every time we had a good chance to score they immediately scored to kind of rub salt in the wound. That’s a real good hockey team.”

For the second consecutive night, Wischow (30 saves) made saves in between the pipes to keep the Minutemen within shouting distance of the Friars. The freshman goalie stopped shots from Kyle McKenzie and MacPhee as UMass trailed by one at the end of the first period. Defenseman Marc Hetnik cleared a loose puck in the crease in the second after Wischow made the initial save on a blast from the point as the PC mounted its attack in the second.

The Minutemen were 0-for-5 on the power play for the second consecutive night and mustered just seven shots on net in each period.

UMass had a chance to knot the game at one with 5:25 remaining in the second period, but Hayden Hawkey (20 saves) stopped Austin Plevy’s initial chance and made a glove save on Kurt Keats’ rebound to preserve the shutout. Steven Iacobellis was in alone on a partial breakaway midway through the first but his shot went over Hawkey and missed the net entirely.

After being suspended in for Friday night’s opener, Ray Pigozzi scored the lone UMass goal with 2:42 to play in the third period, beating backup goaltender Brendan Leahy for his eighth goal of the season.

Josh Wilkins and Josh Monk added goals in the final period to extend the Friar lead to 5-1 and send the 2,262 in attendance home happy.

“I’m real proud of my team,” Carvel said. “Just like all year long we came in and we competed. We didn’t make it easy on the opponent. The kids played hard every minute of the game all year long. Our record was abysmal but we commanded respect from the teams we played. It was a year that pretty much went as I expected. We did a lot of evaluating and now we have to make the right decisions and do the heavy work to get better.”