‘Do You Have The Right To Do Drugs?’ debate held in Bowker Auditorium 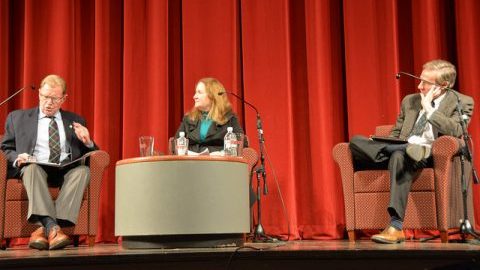 The UMass debate society, The University Union, hosted a debate on whether people have the right to use drugs in the Bowker Auditorium on Wednesday night.

“What are rights? Where we find ‘rights’ we find civil and legal responsibility,” said Murray, who now co-directs the Center for Substance Abuse Policy Research at the Hudson Institute, an American conservative think tank.

“America had 52,404 drug induced deaths in 2015. If consumption doesn’t warrant jail, why should those who make it possible for people to consume have to go to jail?” said Murray.

Murray says that while U.S. drug laws have generally become less strict over the last eight years, the number of deaths due to opioid overdose has drastically increased. He explained the U.S. already pays a high cost because of the effects of alcohol consumption, and that legalizing other drugs will only add to that cost.

“There’s study after study that shows that the social cost and public health care cost of alcohol consumption far exceeds, by seven or eight times, the benefits of tax revenue from alcohol sales,” said Murray.

According to Murray, approval or legalization of marijuana has created many negative social consequences, citing an increase of young users of multiple drugs.

Miron offered an opposing view, vehemently disagreeing that the social and monetary cost of drug use means it should be outlawed. He argued that the prohibition of drugs is only making things worse.

“Whatever you think about drug use, whether you think it’s moral or not, against your religious convictions, healthy or unhealthy — whatever you think of any of those direct effects of using drugs, prohibition of drugs is much worse for almost everyone in society,” said Miron, who is also director of undergraduate studies at Harvard University’s economics department.

“The evidence is that prohibition is extremely ineffective at deterring irresponsible people from using drugs, the type of drug use that will harm people. At the same time, it’s not doing much to discourage activities most of us would like to discourage. Prohibition is creating black markets, crime, corruption, insurrection,” said Miron.

In recent times, Miron notes that while drug use statistics show white people use drugs more often than minorities, minorities are more often incarcerated, and that the war on drugs has unfairly targeted African-American and Hispanic communities.

“There are some people who will say that the prisons are full of non-violent people just convicted of drug possession, and that’s a gross overstatement. The number in there for only possession is indeed very small, but there are a lot of people being locked up for selling. There are a lot of people locked up for selling because drugs are illegal, and that’s where the violence and stealing comes from,” said Miron.

While both panelists agreed politicians often falsely characterize the U.S. prison population as “mostly non-violent drug users,” the agreement on the topic ends there. Murray claimed that “it’s difficult to go to prison” and that most of the drug-offending prisoners in America have been in trouble many times.

Miron, however, said parolees sometimes fail a drug test and are subsequently sent back to prison, even though their original crime may have had nothing to do with drugs.

Also, states with a “three strikes rule” that must send someone to prison for three convictions, run the risk of having a comparatively harmless person thrown in jail because of a trivial and victimless drug offenses.

Thus, Miron argued, the amount of people in jail for non-violent drug crimes is smaller than politicians say, but probably a bigger problem than the number Murray, who called the idea of non-violent offenders making up a large portion of the prison population “the incarceration myth,” would give.