An ode to Amherst’s American Legion 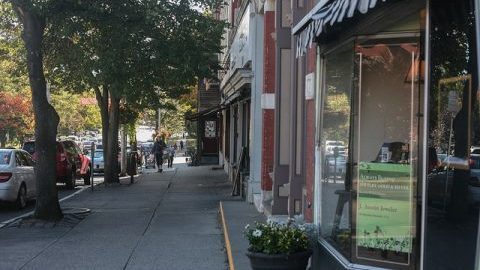 A cannon positioned on its front lawn, neon lighting setting the window panes ablaze, and the white wood paneling of a hundred Amherst homes: this is American Legion, the world’s greatest dive bar. Magnificently, a “dive” is a recognized noun in the Oxford English Dictionary defined as something akin to a house of ill repute, a watering hole of base moral standing, where the elbows of the high and low rub, where dreams are made and ends are met, where you won’t be turned down for your looks or class, where the taps never run dry, and handsome bartenders will dab a teary eye in your hour of need. It is a helping hand, a shot of empathy and a pitcher of amity.

I apologize, it’s easy to get swept away in romantic descriptions of what is this town’s singularly greatest drinking establishment. I’ll try to contain myself. Yet singular is the operative word, at least in the context of Amherst. It is a drinking environment divorced from the atmospheres of Stackers, McMurphy’s or the High Horse. To prove these wildly audacious and hyperbolic claims, it best perhaps to start from the beginning.

I sat down with Sergeant Daniel McKinnon, a veteran Marine, who you can find tending the bar at American Legion any given Saturday night. I say sat down, though in reality I picked his brain at about midnight on a Tuesday in between bouts of karaoke. For the record, Dan sings a mean Johnny Cash cover.

The American Legion Inc. is a United States veterans’ organization. In its own words, it is an “organization that belongs to the people it serves and the communities in which it thrives.” Established in 1919, its impact and functionality spread throughout the country in the form of its posts. The Legion is one such post.

It’s a not-for-profit organization that is designed to support veterans and help local communities, but that’s just at a micro level. If you take a wider view, The American Legion is a political force with lobbying power and an engine for legislative change. Its single greatest legal achievement is probably the GI Bill of Rights. It was first drafted by past National Commander Harry W. Colmery in 1943 at the Mayflower Hotel in Washington. A year later, President Franklin D. Roosevelt signed it into law.

The GI Bill provides funding for the higher education of its U.S. veterans, which arguably amounts to the largest democratization of education that this country has ever seen, putting millions into colleges that would have otherwise never been able to financially support themselves.

The Legion contributes funds to the National Association for Mental Health, finances scholarships, protects children on Halloween, has its own baseball league, and the list goes on. One of the ways it generates revenue to fund all of this is through its posts.

The posts began life as clubs where members could meet and have a drink or a cigarette. They eventually opened themselves up to the public, and the customs have not changed much since. Members-only posts still exist, but in far fewer numbers. Dan said this is because there aren’t enough veterans who’ve served overseas to warrant them; which for him is an unequivocally good thing; the less time America spends in a state of war, the better.

He describes The Legion in Amherst as a bar of two halves: one that belongs to two time zones. During the day, he serves the lunch break crowd, a different breed of Legion goer: older, the kind of person who would love to see America made great again, whatever that means. But as night falls, the clientele begins to change, somewhat younger but not overpoweringly composed of students. A lot of industry people, bartenders, chefs.

When a bar is not-for-profit, it results in tremendously low beer prices, low whiskey prices, and low Jell-o shot prices. I still don’t understand why there are Jell-o shots there.

The Legion boasts the minimum, yet enduringly comfortable furniture requirements. It keeps its kegs on the bar floor under a table. I asked if anyone had ever tried to make off with one and Dan just laughed, mumbling something about how he’d like to see them try. That is part of the attitude of the place. Dan’s better half who also works there, Leah, told me it’s not just the bartenders who’ll tell you to leave if you start pissing people off, it’s the regulars too. After all, this is a bar that, in its own words, belongs to the people it serves and the communities where it thrives.