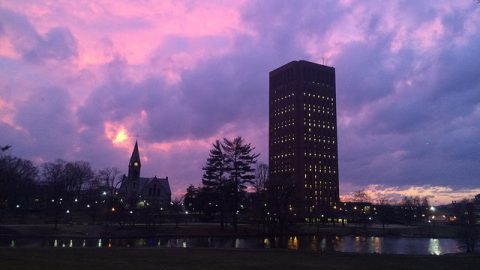 The talk, primarily attended by graduate students, was titled “Anthropological Approaches to Violence and Policy,” with Perez addressing the prevalence of various forms of violence in both public policy and more widespread social contexts.

The scope of his research focused chiefly on modern American political attitudes and the graphic nature of violence throughout Mexico, perpetrated by drug cartels. Throughout the talk, Perez covered topics ranging from the origins of violence, the process through which it is politicized, and the continuing and progressive nature of both violence and policy.

“Direct violence cannot happen and does not happen because of a genetic disposition. It is the exact opposite,” Perez said. “We look into culture and we look into society to help us explain why violence is tolerated and used so effectively by so many different groups as a mechanism for maintaining social control and order.”

“The study of policy through the lens of violence…experienced or propagated by those engaged in its production, can be used to deepen or curb economic, political, and social inequality,” Perez continued.

He provided the example of a controversial immigration law, ICE 287(g), which gives local law enforcement officers the ability to engage in immigration enforcement within their jurisdiction. While the intent of the law is stated to be a means for maintaining national security in the United States, Perez contends that its powers are often used to target communities of color.

Further examples of marginalizing political action provided by Perez were instances of politicians in Arizona and Florida who were discovered to have made up stories about violence on the part of immigrants to inspire further anti-immigrant legislation.

Following the conclusion of the lecture, Ph.D. candidate in political science Ana Maria Ospina said she understood much of where Perez was coming from when he talked about some of the graphic violence taking place in Mexico.

“I’m Colombian originally, we had big cartels there and they performed violence in a similar way,” she said. “What I take from it is kind of an understanding of the experience, personal and political, that I lived through when I was growing up.”

The extent to which violence has worked its way into the everyday lives of many Americans was another topic Perez spoke on to great lengths. He cited video games that normalized shooting immigrants, makeup companies that name their products in ways to mimic violence in Mexico, and recent campaigns stating that “Diversity is a code word for #WhiteGenocide,” as clear examples of violence today.

Beki Atkins, a graduate student in political science and one of the event’s coordinators, said that Perez’s talk was insightful. “I learned a lot about what has been happening in Ciudad Juárez, the intersections with U.S. policy, and also violence in general,” she said.

While the talk consisted largely of Professor Perez reading directly from his research, the audience seemed interested throughout its duration. At the end of Perez’s lecture, audience members asked questions on topics ranging from “feminicide” in cartel cities such as Ciudad Juárez, to failures in the United States’ collective memory when it comes to darker moments in the nation’s history.

Candice Travis, a political science graduate student and one of the event’s coordinators, said she could see how the politicization of violence was inspiring policy today.

“These are important conversations to have, as violence surrounds us perhaps more than we are comfortable admitting,” she said of Perez’s talk and the political studies conference as a whole. “We are better adept to understand it and address it if we can pull from many perspectives and frameworks.”