Assert your rights in interactions with police 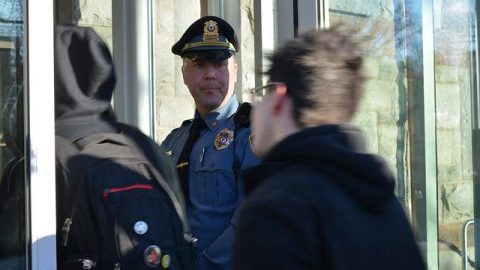 You’re driving down a country road. The road sign reads 45 miles per hour, but your speedometer reads 60. You see headlights emerge from the side of the road behind you, and red lights flash. You pull over. A police officer walks up to the car, flashes their light into your back seat and says “Roll down your window.”

Do you have to?

It’s startling how many people don’t know their rights or whether a police officer is making a request or a command. For the record, you don’t have to roll your window down.

A study by Kathryne Young and Christin Munsch titled, “Fact and Fiction in Constitutional Criminal Procedure,” demonstrated that college students do worse than random chance when asked about their rights. To test myself, I took a series of quizzes online and, wouldn’t you know it, I don’t know my rights very well either! Knowing the basics is one thing—the right to ask for a lawyer, to remain silent, to not be searched without a warrant—but knowing in which police-citizen conversations your participation is optional, not mandatory, or knowing what on your person they are allowed to search, is not always easy to discern. The fact that each state has different laws regarding police behavior and civilian-police interactions adds to the confusion.

Even more troubling is how citizens, regardless of how informed they are, often don’t exert their rights when interacting with police. Young and Munsch found that status and social class, not race, knowledge, gender or ethnicity, were the biggest indicators of whether a civilian exerted their rights against police.  While social status being an indicator of rights assertion is problematic in its own right, I’d like to focus on knowledge and assertion as a whole.

First and foremost, knowing one’s rights and asserting them is critical to self-preservation; it is the absolute best way to avoid getting in trouble. Following police orders because you don’t want to appear suspicious or because you have nothing to hide aren’t good reasons to do so. Unless you’re in a situation in which you’re absolutely sure you won’t get in trouble, the best course of action is not to answer any questions, or really to talk at all unless a lawyer is present. Even if a person knowing their rights hasn’t shown to be an indicator of whether they’ll assert them, it can’t hurt, and it may be a source of confidence in their next encounter with law enforcement.

It’s important to note that police aren’t mythical beings or some kind of anointed high body; they’re around to serve and protect. Police are still civilians, like you and me, and while it is best to treat them with full respect, they aren’t the sergeant to your private; their word is often not an end-all.

So, if you’re informed, speak up, regardless of the officer’s tone. If it is within your rights to refuse an order, you should do it confidently and persistently. If police are searching you, your car or your belongings without your consent, say so firmly and multiple times. If you’ve been pulled over or stopped without cause, ask if you are free to go. If they don’t answer or dodge the question, ask again.  Knowledge and confidence could save you from ponying up the money for a lawyer or spending time behind bars.

On a societal level, assertion of rights may be more important than ever. Internet surveillance is far more advanced than anything the Founding Fathers could have ever dreamed. Facebook can learn almost anything about you, corporations buy data to customize ad experiences for internet users, correspondence can no longer be burned in a fireplace but instead lives on in perpetuity, and government programs like the Patriot Act allow for unprecedented government surveillance. None of this appears to be changing anytime soon. Technology will only improve and resisting its Big Brother effects will require a massive collective effort.

Even if there isn’t much to be done with technological surveillance at the moment, a movement to educate society on their rights and encourage their assertion could be a meaningful precursor to national changes. I’m sure many Americans believe the rights we possess today should be considered human rights—inalienable and due at birth—but for thousands of years, and in many places today, humans had no constitution to protect them. We must honor the extraordinary rights we have today by asserting them to protect ourselves and to establish, as a nation, we will accept no affronts to our privacy, our property or bodies.