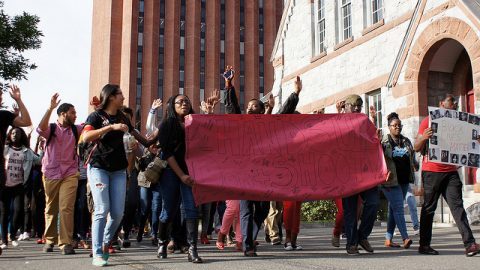 From tackling racism to working to get more students of color at the University of Massachusetts, the UMass Black Student Union aims to be a strong voice for the African-American community on campus.

“One of its goals is to have a space for students of color to come together,” said Washawn Castro, a junior psychology and sociology major. “A lot of the times we feel like we don’t have a space to speak our minds.”

Castro talked about the BSU’s role in offering safe spaces to talk about social issues such as racism and discrimination.

Often, these safe spaces come in the form of BSU “Real Talk” events, where open discussions revolving around race are discussed by students of color on campus.

Castro described an upcoming event the BSU is hosting called “Kissing and Dissing,” where students are encouraged to talk about Black love in different types of relationships. The event will be held Wednesday in the Student Union from 6-8 p.m.

Last year, the BSU worked with the provost of diversity in getting more students of color enrolled at the University.

“We’ve found out that a lot of the times, students of color are accepted here, however not a lot of them end up going,” Castro said.

Another key moment of the BSU’s activism Castro highlighted was the week-long occupation of the frequently-painted wall in the Central Residential Area in response to the vandalism of the Black Lives Matter mural decorated by the BSU.

In terms of off campus support, the BSU has hosted viewing parties of the Ferguson verdict, a trial that pertained to the unarmed death of Michael Brown.

Aside from campus protests, the BSU works heavily on expressing the artistic voices of students of color. The most notable event is the annual fall semester poetry jam, where students of color are encouraged to sing or recite their own poetry on stage.

One of the issues the BSU has faced in the past is trying to get more men of color involved in the general body meetings.

Castro described his own experience as being one of two men of color on the executive board of the Black Student Union. “It’s very female heavy, which there is nothing wrong with that, but we’d like to see more men involved.”

In response to the election of Donald Trump, which shocked a lot of members of the BSU, Castro said the organization is focused on resisting and moving forward.

“We keep fighting forward and continuing with our daily lives, going to classes and uphold difficult conversations,” Castro said.