‘Blarney Blowout’ not as big as past years 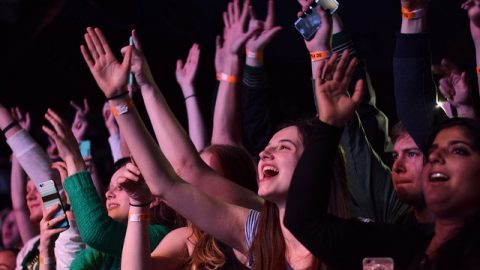 The University of Massachusetts was oddly quiet on the morning of March 4, the highly anticipated “Blarney Blowout.” The campus lacked the large crowds and rowdiness typically seen on the weekend before spring break since 2014.

Despite the decrease in student activity, the campus and surrounding area was heavily occupied by police.

Police from Amherst, Belchertown, Ludlow, West Springfield, Easthampton and Berkshire County were at Puffton Village early on in the day.

West Springfield Sergeant Brian Pomeroy said he hadn’t seen many students or much happening and that police would be stationed in the area until APD made the call for the day.

The entrances of Brandywine, Puffton and the Townhouses were blocked off by police. They were not allowing anyone into either of these areas who did not have parking passes.

Temporary fences were also put up at the entrances of Puffton and Brandywine.

“So far it’s only 11 o’clock and nobody’s really out yet,” said Jesse Pulselli, freshman mathematics major. “From what we’ve heard it’s kind of been contained the last couple years…from some sort of policy changes that they’ve implemented the last four years”

The weather was likely a deterrent; temperatures never rose above freezing.

“There’s no activity. There’s nothing to be concerned about.” said Sergeant Brian Green of the University of Massachusetts Police Department at 11:53 a.m. “So everybody seems to just be enjoying the nice weather,” Green added, cracking a joke. “We’re here. We’re ready for anything that might happen, but nothing’s happening.”

“It’s definitely different being a sophomore, because freshman year everyone’s like ‘Blarney’s a huge deal,’ but sophomore year, it’s like we’ve already experienced that, and we know what the cop presence is,” said Carafa. “There’s not really much to do.”

“The hype’s a little different. Last year we came out here expecting it to be the best day of our lives,” said Provost, adding how this year’s cold weather made making plans more difficult.

“This year we’re coming out trying to look for plans earlier, because as it is, it’s probably negative five degrees with the wind chill,” he said.

While 3,156 tickets were distributed for the concert featuring Mike Posner, Jeremih and Flo Rida, along with student rapper NliteN, only about 2,000 students were in attendance, according to the media updates released by Ed Blaguszewski, executive director of strategic communications and special assistant to the vice chancellor.

Many who did attend the concert seemed to enjoy the performances.

“It was a great experience,” said Laura Forero, a junior accounting major. “I liked [Flo Rida]. I liked the others too, but I liked more of the energy from Flo Rida.”

James Curry, a sophomore computer science major, attended the concert because it was free.

“It was a really great concert,” Curry said. “I thought Flo Rida and Mike Posner were really good.”

Gabby Diorio, an undeclared freshman said that a lot of her friends went to the concert. She said it seemed like a fun thing to do since it was so cold outside.

“We had zero arrests in the town of Amherst. That may be a first not only for an event like this but for a weekend event,” said Amherst Police Chief Scott Livingstone in a press-briefing at 5 p.m., to recount the day’s events. “I think Friday night we had one arrest. So thank you again to all the students for understanding what we’re trying to accomplish in the town.”

“From a UMass police perspective it was a great day, great event. I think the cold weather may have also had an impact…As far as the concert at the Mullins Center, again, great event, very minimum police activity in there. We did have one arrest in the Mullins Center, don’t have all the details yet but it was one person that was arrested for resisting arrest and disorderly conduct. But overall, great day for us,” said Assistant Vice Chancellor and UMass Police Chief Tyrone Parham.

Amherst Police Chief Tim Nelson said there was only one transport from the town and one from campus, an improvement from past years. Both of these transports were alcohol related.

Police responded to two parties that had registered with them, one on Summer Street and one on South East Street. Students requested police assistance with overcrowding.

“I think the success of the day from public safety’s point of view is because of great planning by UMPD and Amherst PD and Amherst Fire Department,” said Amherst Town Manager Paul Bockelman at the press-briefing.

Livingstone said, “From the town’s perspective, I expect the expenses to be similar to what they have been in the last couple of years. It usually takes us a week or two to get all the figures together.”

The Collegian news staff can be reached at [email protected]