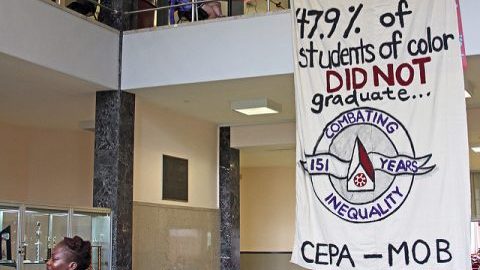 On a campus with a long history of student activism, the Center for Education and Policy Advocacy has often found themselves at the forefront in educational justice movements.

Originally founded under the name SCERA (Student Center for Educational Research and Advocacy) until changing to CEPA around 2010, the organization strives to build student power and make voices heard.

“We’re a student power organization that believes in grassroots power and expanding the political consciousness at the UMass campus. We train, we educate and we mobilize students around issues of educational justice,” said Erika Civitarese, a senior communication major and the campaign and advocacy coordinator for CEPA.

Historically, CEPA and students operating under its former name have played a role in major activism movements at the University. Notable events being the 2007 student strike, unionization of temporary dining hall workers and the fossil fuel divestment campaign.

The demands of the 2007 student strike included removal of police presence in dorms and lowering student fees.

“It was a lot of members from CEPA and the Student Government Association working together…it was like a year-long negotiation session after this one-day student strike. Students walked out of their classes and they all convened in the Student Union Ballroom where they rallied, talked about the demands and then they entered Whitmore,” Civitarese said.

The unionization of temporary dining hall workers at UMass was voted on in 2011. CEPA worked with the American Federation of State, County and Municipal Employees to fight for fair treatment of these workers and produce a contract between them and their management.

“CEPA worked with AFSCME to organize like 300 workers. Due to their temporary status, they face a bunch of abuses in the workplace so they were like, ‘Let’s join a union, and we’ll be able to bargain with our boss’ so we helped run the union drive with AFSCME,” Civitarese said.

As a result of this movement for unionization, the workers won. The work was not done though; three years later management had still not produced a contract for these dining hall employees.

“We just lined the halls with signs, super quiet, just sending messages to management and stuff like that. Management got really freaked out, and then the next bargaining session they had a full-fledged contract set up,” she said.

The most recent major movement at UMass that CEPA has contributed to is the fossil fuel divestment campaign.

Elin Dahal, a senior sustainable food and farming major and external communications coordinator for CEPA explained a challenging aspect of organizing for a cause on a college campus, that inevitably makes the divest movement so impressive.

“One of the really difficult things about student organizing on campus is trying to sustain a multi-year campaign, because there’s so much turnover. People are graduating, people are moving on, doing their thing, but the fact that [the fossil fuel divestment] campaign was able to sustain itself for four years and escalate to the point where the sit-in happened and couldn’t have happened without those four years…and a lot of different student organizations showed up in a big way is a really monumental thing and a show of student power,” he said.

CEPA assists groups like Divest by providing them the resources and knowledge to run a campaign, explained Dahal.

Civitarese said, “At the beginning of the fossil fuel divestment campaign, they were originally outside of CEPA. They didn’t have stability in meeting space and they didn’t have a lot of resources in order to run the full-fledged campaign, so they eventually joined CEPA as a core team. Through that there were more accesses to trainings and stuff like that, in order to equip people to bargain with administration or hold actions. And we had a lot of resources for the sit-in that happened in the spring of 2016.”

CEPA is working with students on a campaign to lower tuition and fees, and continuing to work with the fossil fuel divestment campaign to hold the Board of Trustees accountable to divesting the University’s endowment.

“I know that [CEPA] has always kind of been involved in tuition and fees for public higher education…There’s specific legislation that can either help or hurt higher education and we’ve been facing a lot of funding cuts from the state steadily over the past 20 years,” Katharina Kowalski, a senior majoring in geography, said. Kowalski is and intern with CEPA who began her involvement with the organization her sophomore year.

“I would say definitely go to the events, but overall, just the general body meetings and following on Facebook and being educated about issues is really important. There’s always actions going on and trainings and ways for people to get involved,” she said. “Just show up to the CEPA office and just ask how to get involved and there will be someone there to help.”