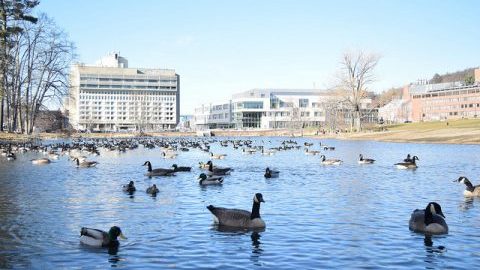 Nine years after the state of Massachusetts issued an executive order in an attempt to limit state agencies’ environmental impact, the University of Massachusetts finds its projected campus growth and its climate sustainability efforts at odds. Benchmark goals may be difficult for UMass to reach, as current plans see the University adding nearly 2 million square feet of buildings while simultaneously attempting to significantly decrease energy consumption and carbon emissions.

Passed in 2007, Massachusetts Executive Order No. 484 set ambitious goals for state agencies, including UMass, in an attempt to lessen the state’s energy consumption and decrease its carbon footprint.

From 2002 to 2020, UMass was required to decrease its greenhouse gas emissions by 40 percent. Requirements went further to mandate that UMass must also decrease its energy consumption by 35 percent by 2020 beginning in 2004, with 30 percent of electricity consumption coming from renewable sources.

In a 2012 update to the University’s Climate Action Plan, UMass’ Sustainability Manager Ezra Small wrote, “The particular challenge that this mandate places before us is that the University expects to add almost 2 million square feet of state-of-the-art laboratories, residence halls and learning spaces as well as enroll an additional 3,000 students and hiring almost 1,000 new staff over the next 4-8 years…The critical challenge that now faces UMass Amherst is to continue accomplishing our campus’ strategic vision for excellence, and to do so in a sustainable way.”

Reports released by the University detailing UMass’ energy consumption and carbon emissions appear to present trends of slight decreases from 2004 to 2015, with 2015 being the most recent data available. Energy-use intensity, which is adjusted annually to reflect campus growth, decreased four percent by 2015 with additional reductions in greenhouse gas emissions by 23 percent over that same timespan.

While such reductions are critical to UMass fulfilling its goal of being a national leader in university sustainability, emissions are far from the mandates set by Executive Order No. 484. From 2015 to 2020, UMass would need to reduce its greenhouse gas emissions by nearly 29,000 metric tons to meet state requirements.

A key driver in the University’s push for sustainability is the student group MASSPIRG and its “100 percent Renewable Energy” campaign.

“We are asking the University to commit to getting 100 percent of its heat, transportation and electricity from renewable sources by 2050, with a benchmark of 100 percent electricity by 2030,” wrote Gabi Mathews MASSPIRG’s state board representative and a sophomore BDIC grassroots organizing and policy major via email. “In order to get this commitment, we are collecting petitions from the student body and faculty endorsements.”

Despite a number of sustainability campaigns by UMass and organizations such as MASSPIRG, some students feel the awareness efforts are not doing enough.

“[UMass’ sustainability campaigns] have always been something that I don’t know much about but I want to see move forward. While I may not be right there with the movement, I love it,” said Madison Bellerive, a freshman psychology major.

“I haven’t really heard of any [sustainability] programs that are going on,” said senior BDIC major Desdemona Kusi. “I don’t see much of how UMass is sending out ways that students could be more efficient or more environmentally conscious.”

Similar efforts to UMass’ in sustainability and renewable energy, advocacy is currently in progress in the Massachusetts State Senate and House of Representatives. Senate Bill No. 1849 was filed on Jan. 20 and calls for Massachusetts’ transitioning to 100 percent renewable energy by 2050.

“[The bill] will allow us to fight back against utility companies that want to cap how much electricity comes from renewable sources,” said Mathews. The bill currently has support from 53 lawmakers in the House and Senate, and will be one of thousands of bills considered over the legislature’s current two-year session.

In a 2015 report conducted for UMass by consultants from RMF Engineering, significant obstacles and potential solutions were identified to aid the University’s push for sustainability and state mandate compliance.

While the retirement of the coal-fired boiler plant and installation of the new power-production facility reduced carbon emissions by approximately 20 percent, the RMF report suggests that additional measures will need to be taken in the near future. The report stated, “Most of the energy conservation measures implemented [thus far] have been costs effective; however, further reduction in energy will most likely require implementation of projects with simple payback periods beyond 10 years.”

Citing UMass’ Energy Master Plan and such projects as the solar photovoltaic project, which saw the installation of over 15,000 photovoltaic panels across campus, the RMF report found that such reductions would only account for one third of what was needed to meet the executive order’s requirements. Because of the addition of buildings that will use substantial amounts of energy for research and science programs, a 12 percent increase in campus area will correspond with a 26 percent increase in energy-use campus-wide by 2020.

“We need to be a little more educated as to what we can do. If we’re going to have solar panels, we should consider having them in every parking lot,” said Kusi.

Conflict between building UMass’ academic and research reputation while meeting the demands of the executive order and student activists will present a challenge to the University over the coming years.

“While there are many small scale projects that can contribute to matching the Executive Order 484 targets, fuel switching and major building renovations represent the greatest initial opportunities with the largest impact,” the RMF report stated. “The targets are not achievable without major cost expenditures [and significant reductions in] current building energy use campus wide.”