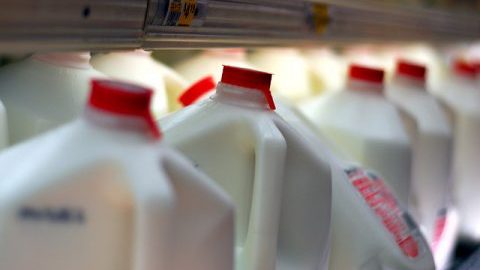 Before my own experience with lactose intolerance, it had not occurred to me that trouble with dairy is such a common issue. According to the United States Physician’s Committee for Responsible Medicine, a whopping 75 percent of people worldwide lack the proper enzymes to properly digest lactase after weaning. It’s no wonder then, that I always have stomach aches when I eat cheese or yogurt—I’m in the majority.

Being lactose intolerant can mean a multitude of things. Many people lose their lactase enzymes after weaning as a baby, but that does not mean that intolerance can’t develop for some later in life. Symptoms from lactose intolerance range from a simple stomach ache, to bowel movement issues to terrible digestive problems.

Now that we live in a society where kale is the new potato chip and there’s a gluten-free option on most major restaurant menus, alternatives for dairy have become increasingly popular as well. These alternative dairy products don’t just stop at milk. In fact, there are lactase-free options for chocolate, cheese, yogurt, most desserts, some soups and even eggnog.

With all of this in mind, it was time to scour the shelves of my local Stop & Shop. I found that the dairy products are all caged in a specific location, and stored conveniently nearby is the dairy-alternative section. Grocery shopping a couple of years ago, I’m not so sure that would have been the case with as many dairy alternatives as there are now.

I narrowed the selection down to my top three choices: Silk Dark Chocolate Almondmilk, rice milk and soy milk. The three looked pretty similar in color despite the chocolatey look of the Silk milk and had almost identical smells.

What I liked most about the dark chocolate almond milk was the consistency. Normally, I am used to an almost grainy or chalky taste from almonds, but I was blown away. Similar to Nesquik, Silk delivered a tasty alternative that masked the taste of normal almond milk. The Silk Dark Chocolate Almond milk proved to be my favorite of the three alternatives I tried.

Some of my favorite desserts used to include tiramisu, chocolate fudge cake and cheesecake. Now that those three are not an option for my stomach, I had to come up with some delicious alternatives that would curb my hunger toward the end of the night.

The three alternatives that I chose were sorbet, rice pudding and cherry pie. These three can be eaten at any time of the year and are all packed with flavor. Because sorbet is fruit-based instead of milk-based, it offers a refreshing punch and masks the decadent taste that cream might offer.

Depending on what kind of pie person you are, cherry pie can be a great alternative to cream-heavy cakes. Rice pudding is always, and should always be, a go-to. Its creamy texture due to the rice alone is a perfect snack and late-night treat.

In terms of cheese, I couldn’t find anything that would do my traditional Vermont cheddar justice. However, I did find out that there are some cheeses that one can actually still digest depending on your degree of intolerance. For example, mozzarella and feta cheese are still in the clear. Because of this, you can still indulge in your margherita pizza!

Despite all of these great alternatives, being completely dairy-free is nearly impossible— it’s in almost everything. From pizza to pasta dishes to salads and more, you’re likely to find that milk, cream or another form of dairy is hidden somewhere in the cracks. There are so many alternatives out there worth trying. If you’re like me and you suffer from terrible stomach aches and digestive issues because of a glass of milk, it is definitely worth trying to alleviate some of the pain.

Cassidy Kotyla can be reached at [email protected] and followed on Twitter @CassidyKotyla.