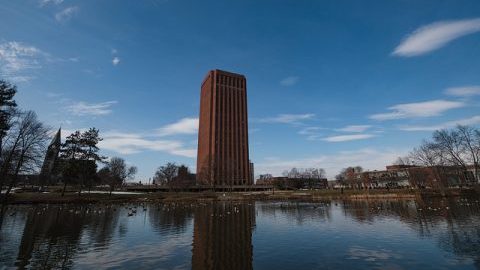 By Kylee Denesha and Sam Anderson

Welcome to Dissecting Science, an original, science-education web-series, written and hosted by Kylee Denesha and produced and filmed by Samantha Anderson. Both were born and raised on Cape Cod and are currently graduating seniors with a similar, unique idea: Science makes up everything we know, so why not make it easy to understand, as well as cool and trendy?

In each five-minute episode, Kylee will cover science news from around the globe, as well as do a show-and-tell of the coolest works of science in our own community of Amherst, Massachusetts. Sponsored by Greeley Kyle and the UMass Amherst Department of Journalism, Sam and Kylee are humbled to be making science fun and accessible for everyone.

Kylee is an aspiring scientific reporter and multimedia journalist. As an avid watcher of Bill Nye and Jeff Corwin, Kylee has always had a passion for how things work and how we can teach others about them. She has experience with anchoring, reporting, writing, editing and acting. In conjunction with her partner Sam, she wanted create something that would apply all that she has learned over the course of her UMass career. She hopes to make it to the Smithsonian Institution or National Geographic someday.

Sam found a passion for photography at 17.  She grew her skills in digital photography from working in a small studio in Sandwich, Massachusetts, and then by working as an assistant photo editor at The Massachusetts Daily Collegian. Sam went on to take a broadcast performance class with Greeley Kyle in the hopes of becoming an anchor one day.  She found that her passion for photography transformed and meshed well with the art of videography and production.

Episode One walks you through prevalent news in the world of science, including the release of a new robot that carries around your belongings. Kylee will also show you some methods of ancient Chinese medicine. No, not mashing herbs in a mortar and pestle, but some alternatives to acupuncture and bloodletting that has been up and coming in society.

New episodes will be released every two weeks on the Dissecting Science website, so stay tuned! Kylee and Sam happily take suggestions for new episodes, and are always looking for people to share their science works with us! They would love to feature you.

Thanks for viewing. They hope you enjoy what they have created!

Link to site where episodes will be uploaded via Vimeo: