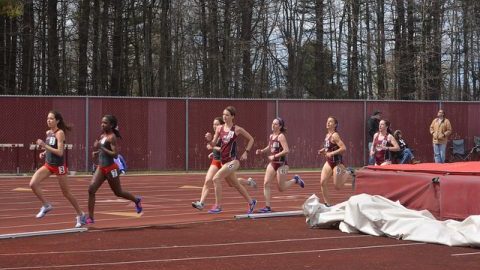 At the New England Championships this past weekend, Massachusetts women’s track and field sprinter Emilie Cowan stole to show, running a near personal best 2:10.38 in the 800-meter dash. She was also ahead of her next competitor by 2.56 seconds in the race, easily taking the win.

This season has been one to remember for Cowan. In the 2016-2017 indoor campaign, she has registered new personal bests in every event from the 200-meter dash to the 500-meter run.

As an individual this season, Cowan has only been outside the top three one time, at the John Thomas Terrier Invitational where she placed ninth running a 2:10.14 in the 800-meter run, just 0.02 seconds shy of her best in the most competitive meet of the year.

The Maplewood, New Jersey native began her track career at just eight years old. From the beginning, she always knew that she would run track at the collegiate level.

“My parents always pushed me to run at the collegiate level someday from a very young age,” Cowan said. “In high school it was even more reinforced, but I’ve always wanted to continue track for as long as I could.”

Cowan, an economics major, is hoping to pursue information technology and political science minors during her time at UMass.

“I came to UMass because the school has great academics and athletics,” Cowan said. “It’s very hard to find a good balance between the two, but I found it here and I’m extremely happy I picked this school.”

“Coach Julie and coach John make for a really competitive environment and they are always pushing me to improve every day,” Cowan said.

Cowan also noted that the team has bonded over the course of the season.

“Last year, we had a really close team but this team, we furthered that bond,” Cowan said. “A lot of girls on the team are roommates on campus and I think that the time we spend together outside of track helps us when we are competing and is a testament to our success.”

She is also interested in all things cosmetology. She enjoys doing hair and makeup which “sounds really stereotypical and girly,” admitted Cowan. She enjoys cosmetology as yet another way to bond with her teammates; whether it is matching hair styles before a meet or something to do when they aren’t running.

Over her 11-year track career, Cowan has always defined herself as a sprinter, as her programs didn’t have many distance events while she was in elementary school. She expanded to the 400-meter dash in middle school and, more recently, the 800-meter run in high school.

While her performances speak for themselves, Cowan is also a very involved student at UMass and is involved in Women in Sport Management (WISM). While she is not a sport management major, her athletic background has led her to this club and potential career opportunities in the sports industry after graduation.

When her career with the Minutewomen is over, she hopes to see how far track can take her professionally. She plans on pursuing running as long as possible but she will also continue giving her full effort in coursework in hopes of landing a job in one of her many fields of study.

In addition to winning the 800-meter run at the New England Championships, Cowan also competed on Sunday in the 400-meter dash at the Boston University Last Chance Qualifier in hopes of qualifying for the NCAA indoor track national meet in College Station, Texas. Unfortunately, her time of 53.93 seconds didn’t make the mark but she has outdoor track to look forward to, attempting to meet the goal of an NCAA Championship qualifying bid.

Despite not qualifying for nationals this year, Cowan still has one more meet in the 2016-2017 indoor track season which will be in Boston at the ECAC Championships.