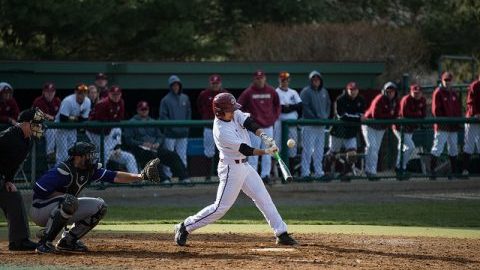 In its first game of the 2017 season north of the Mason-Dixon Line, the Massachusetts Baseball team traveled to Northborough, Mass. to take on Holy Cross. The game was tied at five through seven innings and then came the bottom of the eighth.

Ten runs on seven hits in one half-inning put the Crusaders (4-11) ahead 15-5, which was the margin they would eventually win by.

A Cam O’Neill home run and a Bill Schlich single to start off the eighth knocked Casey Aubin out of the game after two innings of work. Kevin Hassett, Christian Rosati, and Marcus Fry were all needed to get out of the inning for the Minutemen (4-8). Hassett picked up the loss, his second of the season.

“Everything went wrong in the eighth inning,” UMass coach Mike Stone said. “They hit the ball and a number of homeruns in that inning. So it was just, it was 5-5 and it’s a hell of a ball game going into the bottom of the eighth and you come out of it and you’re down by 10 runs, everything goes wrong.”

O’Neill would homer again in the inning and so would Austin Masel, counting for three of Crusaders five homeruns. The long ball was the centerpiece of both the Crusader’s big innings. Kellen McCormick and Anthony Critelli led a three run sixth inning via the homerun. Stone called it “a hitter’s night.”

“It’s a closed ball park, the wind was blowing out and they hit the balls really well and so did we and that’s why there were a lot of homeruns in the ball game.”

Despite needing four pitchers to get out of the eighth inning, starter Connor Donahue and middle reliever Aubin managed the Crusaders lineup well for seven innings. In five innings, Donahue allowed only two runs on three hits while striking out six men.

In contrast, Holy Cross did not get many innings out of its pitchers. Pat McGowan went the longest pitching 2.2 innings for Crusaders. Michael Spada, the pitcher of record when the Crusaders piled on 10 runs in the eighth was awarded the win.

“I don’t know what [the opposing team’s] approach was with their staff, maybe they were on pitch counts,” Stone said. “It seemed like they were because they made some changes at odd times. It seemed to work for them tonight.”

The Minutemen would finish the game 3-20 with runners in scoring position. The inability to take advantage of their opportunities kept them from taking the lead. For the first four innings UMass had a runner on base but was unable to cash in until the fifth inning.

Even when they were able to put a run on the scoreboard, the Minutemen did not reach the inning’s full potential. UMass had the bases loaded and no outs and the middle of its lineup coming up and were only able to push across one run.

“Didn’t execute, didn’t execute enough,” Stone said of his team in ability to score with runners in scoring position. “Well absolutely it hurt, we had opportunities early and couldn’t cash in, that doesn’t help you late in a ball game.”