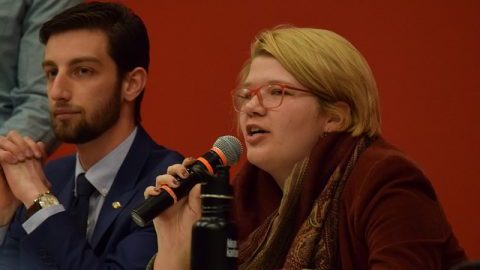 Anthony Vitale and Lily Wallace were re-elected as president and vice president of the University of Massachusetts Student Government Association for the 2017-2018 school year, winning 2,504 of the student body votes in a historically big turnout with 4,915 total votes cast.

“We are humbled and grateful,” Wallace said after the monumental win.
“Serving as the SGA president has been the most amazing experience of my college career and I look forward to representing the student body in the year to come,” Vitale added.

The win is historic not only for its large turnout, but also because it is the first time an incumbent ticket has won the SGA presidency and vice presidency since 2000.

Voting was closed at 12 a.m. and the results were announced 40 minutes later with 134 write-in votes yet to be processed at that point. Lincoln Quang Duong’s one-person ticket for president received 1,142 votes, followed by presidential candidate Nathalie Amazan and her running mate Timmy Sullivan, who both received 937 votes.

“We ran a good campaign. There were things we could’ve done better. The other team did an excellent job, and we will continue to keep making this campus a better place,” Duong said.

“You know, it was a fun campaign. Timmy and I had a lot of fun in this campaign. We’re still going to do the work we said we would. We’re dedicated to what we were campaigning on,” Amazan said.

Vitale and Wallace ran a campaign built upon their experience in the SGA, the relationships they have made with administrators and the successes they have had in their current role as president and vice president, including the initiated re-opening of the Hatch and redevelopment of the Student Union.

The results, however, came amidst a difficult week-and-a-half of campaigning for Vitale and Wallace. The duo received two campaigning suspensions, one on March 4. for using Registered Student Organization resources to display “approved printed propaganda,” and another on election-day after the two were found to have “corruptly offered positions in the SGA to members of the SGA,” according to the SGA minutes from their March 7 meeting. Vitale and Wallace were subsequently suspended from campaigning from 11 a.m. to 6 p.m.

Wallace called the recent suspension “bull sh*t.” In a statement, she justified the actions that drew the suspension.

“I have no power to promise these positions in the first place. It was a statement offering collaboration between campaigns, not promising positions that I have no power over and it was illogical for this ruling to result in our suspension.”

Election Chancellor Ryan Jackson, who handed down the suspension to Vitale, said he expected Wallace’s criticism, adding he doubted she maliciously went out of her way to break the rules. “Unfortunately, events occurred which made the commission act a certain way, but in this situation, I expected Lily to outright contest this, and we acted accordingly.”

As election chancellor, Jackson serves as the liaison between an administrative advisor, who oversees the tallying of the votes, and the candidates and the rest of the student body.

“This has been a crazy election,” Jackson said, referencing the many warnings and suspensions given over the course of the week-and-a-half of campaigning. “All those issues at once hit very hard, and the commission, as well as myself, we did everything in our power to remain unbiased and keep the playing field as fair as possible.

The SGA’s slap-on-the-wrists did not solely extend to the Vitale/Wallace ticket, however. A warning was also given to Duong on March 7, the night before the election. Duong was found to have promoted the illegitimate campaign of himself and student James Spencer on his campaign’s Facebook page, despite kicking off his campaign without a vice president to run with him.

Duong received a 48-hour suspension on the evening of March 2. as well, and the Amazan/Sullivan ticket received a warning on March 4, too.

Ryan Boyden, a senior double major in physics and astronomy, voted for Vitale and Wallace. Boyden recalled hearing one of Vitale’s speeches when he ran last year with Nick Rampone on the ticket, and he, “agreed with a lot of the things that they were doing,” Boyden said. “And from what it sounded like, they were doing a good job with many of those things.”

“You might as well give repetition a chance,” he said. Boyden also admired Vitale’s work toward making student businesses more flexible with dining dollars, most likely referring to Vitale’s recent efforts at making People’s Market, a student-run business on campus, work with student dining dollars.

“I just think that’s the simplest thing to implement for every-day UMass students,” he said.

Senior neuroscience major Nadja Arifovic also voted for the Vitale/Wallace ticket and expected them to win. Arifovic is a member of UMass Emergency Medical Services (EMS). She mentioned how the candidates went to UMass EMS and talked to the staff members there, including herself. According to Arifovic, this act set them apart from the other candidates.

“I think that really showed how much they’re willing to work together with the student businesses and student-run organizations on campus,” Arifovic said. “They were just the only candidates who came to us and asked us what we needed.

Mira Mehdi, a sophomore resource economics major, voted for the Amazan/Sullivan ticket based off of their promises to make the UMass campus more sustainable.

“They seem like they really want to change this school for the better,” Mehdi said. “I know they wanted to try to get UMass to be the number-one sustainable campus in the country,” noting the compost bins around campus that Sullivan worked to set up with the SGA secretary of sustainability.

Because Amazan and Sullivan are freshmen, Mehdi was unsure as to whether they would win. However, she said, “I hope they will win.”

“For them to be in those positions is to put people who represent some marginalized groups into positions of power,” Maddy McLaughlin, a sophomore gender studies major, said. “Identity politics play an important part in this. It’s one thing to just see a bunch of straight, white kids in charge.”

Freshman finance major Kunjie Qian voted for Duong for SGA president, but he did not expect Duong to win. Qian met Duong after he was introduced to him by a friend, who is in the same fraternity as Duong. “He emphasized the fact that he wanted to know what everybody wanted, and he was very smooth, so I had to give it to him,” Qian said. “I feel like he was a good guy.”