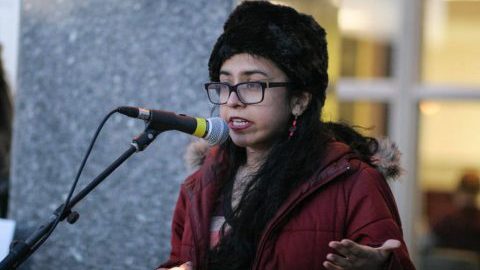 Ghazah Abbasi is a sociology Ph.D. student at the University of Massachusetts. She focuses on political sociology and has a keen interest in feminist theory. Hailing from Karachi, Pakistan, Abbasi is very sensitized to social issues, specifically realities surrounding class segregation and poverty.

She moved to the U.S. in 2009, has lived in the Pioneer Valley for eight years and has been involved with student activism during this time. Most recently, she has been a key organizer of the Sanctuary Campus Movement on the UMass campus.

AG: How did you become involved with activism?

GA: I’ve always been interested in activism. I grew up in Pakistan and I come from a middle to upper-middle class family. Both of my parents themselves really came from working class backgrounds in Pakistan, and you see poverty and social deprivation all around you. Here, there’s a lot of class segregation, in addition to residential segregation, so people don’t actually see the poverty within their own communities.

AG: As an international student, what does activism mean to you?

GA: Well, as I mentioned, I’m from Pakistan…I guess I am pretty sensitive about this. You know, the U.S. has made military authoritarianism in my country possible, which has led to us having really bad public higher education institutions. I’ve met a lot of students here from the global South. That’s one thing that has been really amazing about being in this community. It’s not very diverse, but in the graduate student community, there are actually a lot of international students. The U.S. is an imperial state, and I’m an international student from the global South. And it’s important for me and other international students to bring an anti-imperialist view to the U.S. Frankly, I think only we can do it and I think that that’s really important. People here are completely oblivious of how the United States benefits from the exploitation of poor people in poor countries, from starting wars in those countries and affecting those countries politically and economically. I think that it’s important to me as an international student, to incorporate that political aspect into my being here.

AG: How did you become involved with the Sanctuary Campus Movement here at UMass?
GA: I was friends with Anna-Claire Simpson [another organizer] on Facebook but I had never actually met her in real life. We had similar politics and started talking a lot after the Trump election. She’s a white American student and from a Jewish background. One of the things that drew us together was actually how much sexism there was, post-Trump. Even among the left there was a lot of focus on the white man in all of the analyses…anyway, that’s why Anna-Claire and I became friends, we pondered over that. And she knew a person that was organizing the walkout, and then she got in touch with me, and we kind of just went from there. She got in touch with many other people, some people from GEO were involved, she cast a wide net. We were working pretty close, more closely than we were working with other people. I became involved because I thought it was really important. I thought it was a really good opportunity to bring a left perspective on immigration issues, and sort of a race perspective on class issues and also, an immigration perspective on class.

AG: What do you think are ways in which the movement on-campus has been successful?

GA: We’ve gotten some concessions from the Chancellor…it’s been smaller things, e.g. he set up a fund; a task force to deal specifically with these issues. The Chancellor has also signed various national level petitions to protect laws like [Deferred Action for Childhood Arrivals]. What we’ve done is, we’ve also definitely shifted the culture…allowed it to have a lot of attention. It’s definitely something people are thinking about. We have a broad conception of sanctuary, and I think it’s brought together many questions of inclusivity as it pertains to class, race, gender, and what it means for UMass to be an equal opportunity campus, where everyone has an equal opportunity to get an education.

AG What do you think are areas of improvement for this movement? And for student activism as a whole, here at UMass?

GA: “I think it would be great if we could get even more people involved, and I think that’s a broader issue. A challenge is that undergraduate students feel like they’re consumers of education…they don’t really have a vision of education as something that can bring about or be a vehicle of social change. But that’s not an issue particular to this campus; it’s because education is so expensive.

AG: How would you go about creating a more accommodating space, for people with many identities on campus? How can people be involved on distinct levels?

GA: That’s a really great question. And it’s been a really big challenge, to be honest. It’s been really hard, because something we’ve been really committed to is that Sanctuary movement is a feminist space and it privileges the voices of international women, native women, Black women and white women. That’s been a struggle.

I think that leadership needs to be set intentionally, that we can’t just allow anyone who wants to be at the forefront to be at the forefront. All of things that we’re fighting—racism, xenophobia, gender misogyny, gender based violence—the movement is not immune to any of those things. So it’s important. We’ve had difficult conversations and haven’t been shy about those. We’ve said that we don’t want this to be someone’s personal PR campaign and we don’t want it to be a campaign where women are doing all the labor and are in the background while some guy comes and postures about leadership. We’ve been sensitive about those kinds of issues. We’ve tried to reach out as much as possible to women. And not just women, but also transgender people and people of different gender identities, genderqueer people, as well as international students, Black students, people of color. This is because those are the voices that we think should be the most privileged in the movement. We’ve also tried to partner with organizations that have similar values, e.g. the Pioneer Valley Workers Center. They deal almost entirely with undocumented workers’ issues. They have the same kind of politics that we do and we try to partner with people who have similar ideas.

There’s many different ways of being involved…I think everyone can make a contribution through their own work…The narratives that people create around things like Sanctuary Campus movements are extremely powerful. It’s a really important contribution. Everyone doesn’t need to step in front of a bullhorn. But at the same time, we don’t need “mansplainers” taking up a lot of public space to build their own social capital; that’s not what we want.

AG: In a more immediate span of time, how do you think the campus and surrounding communities can help? How would you go about involving people and raising awareness about the movement?

GA: For our next actions, we want to do more publicity and get more people from campus involved. We have good relations with activists in the city of Northampton and in the town of Amherst who are working on parallel issues. Northampton is already a full sanctuary city, but Amherst isn’t yet, to the best of my knowledge. And so we’re working with them, especially with the town of Amherst, because you know, UMass and Amherst; there’s some overlapping jurisdiction there. Definitely we’re developing those connections further.

We fully support a bill known as the Safe Communities Act, a bill in the Massachusetts legislature. One of the things that us and many organizations were doing was trying to use our own people to help make it an act. Basically we did a lot of call-ins to help make that happen. According to this bill, the entire state of Massachusetts i.e. all the campuses, all the cities and the towns, would become sanctuaries. Obviously that legislation is something we support, we support initiatives like that. We want to support the Pioneer Valley Worker’s Center, and we want to support the town of Amherst’s Sanctuary efforts. So at our teach-in, we invited people from Amherst and the Pioneer Valley Worker’s Center. We want to give greater visibility to their movements and help build those connections between the campus movements and those in the cities…and the University needs to do more, a lot more. We’re living in this super crisis mode and it’s time for the University to undertake measures that are not just cosmetic.

AG: Do you have any concluding thoughts on the current socio-political climate, and how do you think we should persevere in challenging environments?

Aakanksha Gupta can be reached at [email protected]