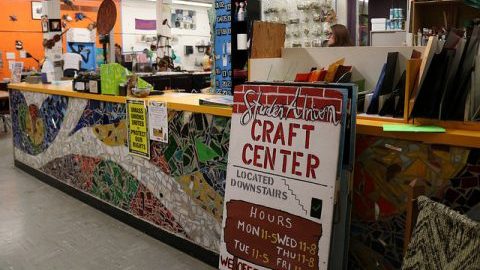 On any given day at the University of Massachusetts campus, you could see people wearing items from one of its own student’s clothing line. They might be wearing T-shirts, crewnecks, tank tops or hoodies with messages like “Free Negro,” “No Hoteps” or “Whiteness is Exhausting.”

The line, Free Negro University, was created by senior political science major Josh Odam and has seen at least 175 sales on its Etsy page. The clothing is printed at the UMass Craft Center and Campus Design and Copy.

“I can make something widely accessible and applicable, and provide entry points into larger conversations with a T-shirt,” Odam said. “It’s been really cool to see that play out, and that people like it. They enjoy it, they want to be a part of it.”

Odam said the inspiration for his T-shirt line came from two major sources. First, he said that he read a lot of writings by 20th century author and essayist James Baldwin over the course of the summer. He mentioned the novel “Giovanni’s Room,” being especially significant.

His second source came from the Black Joy festival in Washington D.C.’s Malcolm X Park, which he attended while in the city for the second year of his fellowship.

Odam described it as an amazing experience involving a drum circle, children playing and a feeling of total freedom.

“Everybody seemed so free. It seemed like nobody was worrying about anything,” he said. “If I were ever to do something, I’d want it to feel like this. I want everyone to be comfortable, safe, free and able to bask in themselves, and bask in their Blackness.”

At the festival, Odam took a picture with his friend captioned “Free Negro University.” Remembering the caption while buying a shirt at the mall in October, Odam told his friend that he wanted a Free Negro shirt.

His friend told him to buy one, and Odam replied that he didn’t think anyone sold them. After his friend suggested he make one, Odam went to the H&M in the Holyoke Mall to purchase plain T-shirts.

Once at the printing shop, he said, “Press me up two Free Negro T-shirts.”

“They did,” he said. “They gave me kind of a confused look, but they did it.”

After he started wearing them, people expressed their interest, asking if they could get their own shirts with the caption.

“There seemed to be a demand for it because people were really digging it,” Odam said. “I called up the company and said, ‘I need the font you made the shirt with.’”

After the company sent him the font, he made a screen with the caption and began pressing his old T-shirts.

Odam got trained at the UMass Craft Center and Campus Design and Copy on how to make a silk screen by placing an emulsion on it and letting it sit.

“They have to get the [printing] transparency and get the screen itself,” said Norma Barratt, who works at the Craft Center. “The making of the screen is all done in the darkroom.”

“You could print hundreds of shirts if you take care of [the screen],” said Shakhi Begum, who also works at the Craft Center..

“What seemed like a very foreign process on how to do this became very simple,” Odam said. “Because of the assistance and help I got from the CD&C and the Craft Center at UMass. They’re really great people”

The ease of the process is also helped by Odam’s simple yet powerful designs, most of which are just lettering printed onto articles of clothing. Odam said he tries to think of short phrases that can be placed on shirts.

Free Negro, Free Negress and Free Negrx designs are all available, along with the custom orders Negro Libre and Negra Libre.

Odam described the No Hoteps design by explaining the phrase “hotep.”

“Some Black men do not have a very intersectional view of freedom, and that idea of freedom is built upon replicating already oppressive systems, just putting Black cisgender heterosexual men at the top,” he said. “We call those dudes hoteps, and we don’t take very kindly to hoteps around here.”

Odam also described a new design which also promotes viewing racial liberation as intersectional, which reads, “If your pro-Blackness is homophobic, misogynistic, transphobic and/or sexist, it’s not pro-Blackness. It’s trash.”

He said he got a lot of “flak” for the whiteness is exhausting design, saying that some people who see it accuse him of not liking white people, which he described as “putting a lot of words” in his mouth.

Instead, Odam said he does not like the construction and system of whiteness, and the ways it exists and acts in everyday life.

Odam said he only prints things he believes to be true, and that he can provide examples to support his messages.

Odam talked about Free Negro University’s most popular shirt, which reads “F*** Trump.” He said he had been thinking about the idea for the shirt for a while before its release.

Odam said he had seen a lot more positive feedback than negative to his shirts, with a lot of people supporting them and wanting to purchase them. However, some people have told him that his shirts are not productive and that he shouldn’t sell them.

“That’s whiteness playing out,” he said. “Doing this has shown me that if you’re going to do this, you have to come correct. I can provide the receipts to anyone who asks. Free Negro University has not seen a dime from the SGA. My position is unpaid, this has all been from my own pocket, my own savings account and the support of my own friends.”

“But it’s interesting to see how a dude making T-shirts can piss people off,” he added.

Odam also said he has received criticism over the use of the word “Negro.” He said his shirts are not a message that Black people should call themselves negroes.

He also said people have told him he should not make shirts with these designs while in the student trustee position.

Odam also talked about how FNU collaborated with the Afro-American Studies Department in bringing Theater in Motion, a New York-based underground theater troupe, to UMass to do two performances in February about dating and abusive relationships.

Odam is an alumnus of the Theater in Motion program, and said he was happy to use his platform to give them more exposure in Western Massachusetts.

“It’s things like that,” he said. “We’ve got a lot of things in the works, and I think a lot of people will be happy with the services we provide to the community.”

With Odam graduating in May, he said he will likely go back to his home state of New York to move toward enrolling in a master’s program and go to law school.

He said he was glad FNU is a mobile operation, and that he can do it outside of Amherst because of the skills and resources he has acquired.

Purchases to Free Negro University are made on its Etsy page, and FNU can be followed on Instagram @FreeNegroUniversity.