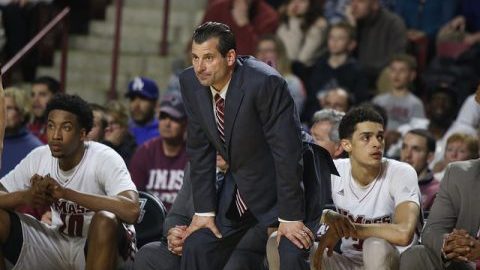 Getting you caught up with all things Massachusetts athletics and other NCAA news:

Basketball search closing in on candidates

While UMass Director of Athletics Ryan Bamford is keeping a low profile in search of the Minutemen’s next men’s basketball coach, a couple of names have recently emerged as leading candidates.

Current Florida Gulf Coast coach Joe Dooley could be emerging as the favorite to fill the vacancy, according to a report from Matt Vautour of the Daily Hampshire Gazette.

Dooley has led the Eagles to back-to-back NCAA tournament appearances after winning the Atlantic Sun tournament each of the last two seasons. In his four years at FGCU, Dooley has compiled a 91-46 (.664) record and was recently named the A-Sun Coach of the Year.

According to the same report, Monmouth coach King Rice has also been contacted by UMass.

Other premier Power Five schools still in need of basketball coaches are California, Indiana and Oklahoma State, with UMass being one of the better available openings. In the Atlantic 10, Duquesne and now Virginia Commonwealth are also in the market for a new coach after Will Wade left the Rams to join Louisiana State. George Washington is expected to make interim coach Maurice Joseph its next head coach.

Rice, however, has emerged as the leading candidate for the Duke’s opening and it’s reported that it is his job to turn down.

Roush finished 16th in the preliminary round last Thursday and later finished seventh in the consolation finals later that day with a score of 277.

Roush is a four-time A-10 champion in wins in both the one-meter and three-meter dives during her career with the Minutewomen. She was recently named the A-10’s Most Outstanding Diver for the second consecutive year.

The UMass women’s club hockey team played in the Final Four of the American Collegiate Hockey Association over the weekend before falling to top-seeded 1-0 Liberty in the national semifinal.

Minutewomen goaltender Amber Greene stopped 40-of-41 Flames shots, but a second-period goal to Liberty’s Chelsey Greenwood at 11 minutes, 12 seconds mark was all that was needed to eliminate UMass.

Kessinger recognized by A-10

UMass freshman outfielder/pitcher Nolan Kessinger took home A-10 honors this week, earning the co-A-10 Rookie of the Week in the Minutemen’s stretch of five games in Florida during spring break.

Kessinger went 10-for-20 (.500) in five games against North Dakota State, Harvard and a three-game series against Bucknell in Charlotte, Florida.

The freshman extended his hitting streak to a team-best eight games, and secured multi-hit games in three of those contests. Throughout UMass’ (4-7) five-game week, Kessinger notched three doubles and drove home three runs while scoring a total of seven runs over in those games.

He also made his debut on the mound this week, throwing 1.2 innings of hitless ball in his appearance against NDSU and Bucknell last Wednesday and Saturday, respectively.

Kessinger currently leads the Minutemen with a .419 batting average (13-for-31) and is second in hits (13), doubles (four) and is tied for second with runs scores (eight).

Here’s what’s on deck for UMass athletics this week:

Baseball: at Holy Cross (Tuesday), at George Washington (Friday-Sunday). The game against the Crusaders is the first the Minutemen will play in Massachusetts, while the three-game series against the Colonials makes the start of A-10 play.

Softball: The Minutewomen (8-14) open up A-10 play this weekend with a three-game series against St. Bonaventure this weekend at Sortino Field. UMass and the Bonnies will play a doubleheader on Saturday with the conclusion being played Sunday at noon.

Men’s lacrosse: UMass (3-4) finishes its non-conference schedule this Saturday at home against Brown. The Minutemen are currently 25-29-1 all-time in their series against the Bears, and have dropped each of the last two meetings in 2015 (18-12) and 2016 (15-7). Faceoff from Garber Field is set for noon.

Women’s lacrosse: After a 12-day break between games, the Minutewomen (3-3) also wrap up their non-conference schedule this week with a road game against Harvard Wednesday and a home game against Marist Saturday at Garber.