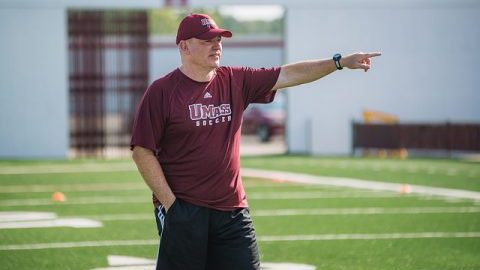 The focus of most Massachusetts fans has been on the men’s basketball coaching search and spring sports that are in full swing at this point, but the men’s soccer program made news Tuesday signing junior college striker Jack Fulton.

Fulton attended Feather Rivers College the past two seasons, where he helped lead the Golden Eagles to a 31-6-6 record over that span.

“We are delighted to welcome Jack to UMass. To compete at the highest levels of the Atlantic 10, we are looking to improve our offensive output and he is an attacking player with the capability of scoring consistently,” Minutemen coach Fran O’Leary said in a press release from UMass athletics Tuesday.

“Jack played at a high level in Australia and was a prolific goal scorer at the junior college level in California. A two-footed striker, he is strong in the air and comfortable in possession. An out-and-out striker, we will look for him to immediately make a contribution on the attacking end of the field,” O’Leary added.

Over his two seasons at Feather Rivers, the Australian native was the top scorer in the Golden Valley Conference with 13 in 2015 and 26 in 2016. Fulton has been named to the All-GVC first-team twice and was the MVP of the conference last season.

Fulton joins a trio of players that signed with the program during the February early signing period, Christian Carucci, Eli Cronin and Amherst native Davis Smith, as newcomers thus far for next season.

Tuesday was supposed to represent the triumphant return of the UMass baseball and softball teams to the Northeast with the Minutemen slated to take on Northeastern in their home-opener and the Minutewomen traveling to Boston University to take on the Terriers in a doubleheader.

Clearly, Mother Nature wasn’t on board with these plans though and inclement weather and subpar field conditions caused both teams’ games to be postponed.

For the baseball team, its game against the Huskies was postponed and a makeup date has not been set. Its game against Boston College scheduled for Wednesday was originally supposed to take place at the Eagles’ Shea Field. For similar weather-related reasons, that game was moved to the New England Baseball Complex in Northborough. First pitch is set for 1 p.m. Wednesday.

The softball team rescheduled its postponed doubleheader to Thursday at 2 p.m. and 4 p.m. respectively. Both games will take place at BU Softball Field in Boston. The Minutewomen will have just one day to rest in between the doubleheader with the Terriers and their conference-opening series with George Washington, set to start on Saturday.

The Atlantic 10 conference announced last month that a record number of 1,763 student-athletes were named to the A-10 Commissioner’s Honor Roll for the 2016 fall semester.

The list of recognized athletes included 165 UMass athletes, with only Fordham topping them in honorees with 166. George Mason finished third with 145 student-athletes and Duquesne and Saint Louis tied for fourth with 131.

To qualify for the Commissioner’s Honor Roll, a student-athlete must compile a grade point average of 3.5 or higher (on a 4.0 scale) within a given semester. Freshman through seniors are all eligible for the recognition.