On his self-titled album, Future offers a familiar, but pleasing concoction of sounds 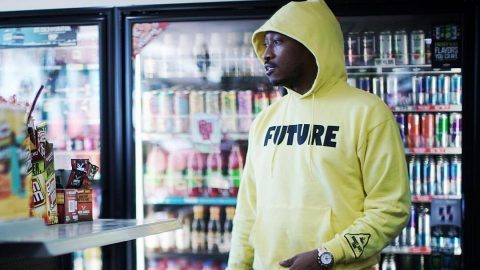 When Future claims to put out two albums in one week, I challenge the average fan to not be consumed with glee. It is like when you order something online and the company accidentally sends you two of the same thing without realising it, or like finding money in an old coat pocket. You feel blessed, endowed as if the sun is shining a little brighter, just for you.

I say ‘claims’ because at this point, the labels of mixtape and album are arbitrary when it comes to Future.

Anyway, did anyone else notice the weather transform into early spring for the week of this double Future drop? I’m not a spiritual person, but I found myself wandering into campus, catching snippets of “Mask Off” gliding out of car windows with a full face of premature February sunshine, and wondering if some larger forces weren’t at work.

But, after that excitement subsides and you’re left to reflect a little on Future’s first moves for 2017, a part of that initial joy begins to wain. The self-titled album, the first of two full-lengths the Atlanta rapper released in back-to-back to back weeks, leaves something to be desired. I’ve had it on repeat, combing through and trying to get really caught up in it, but it fails to grab hold in the way some of his more exceptional 2015 or 2016 releases did.

I haven’t stopped listening to “Purple Reign” since it came out last year. It has longevity and it has diversity; that brilliant Future balance of softer tracks paired with darker, strictly trap sounds. “FUTURE,” released Feb. 17, is constructed in that same vein, finding him trying to strike that same balance, like putting “Might As Well” on one side of the scale to balance “Rent Money.”

Future’s constant output is something of a blessing and a curse. One Pitchfork writer proffered that “Future has a formula now. That means that we can expect less spontaneity and more sustainability.” This kind of statement holds some water, as there is a slightly formulaic feel to “FUTURE,” a feeling that his prolific nature may douse the quality of his music. This is the curse  of the plethora of music he releases.

But the blessing is just the simple fact that Future fans always have something new to listen to, new to talk about. I remember reading a review of Drake’s “Views” critiquing the 20-track length of the album and thinking to myself “What? Why would you complain about more music from an artist you think enough of to review?” And the same can be said of Future, an abundance of music is blessing in itself, because if he didn’t release enough music there would be equally negative mumblings of disquietude.

If the album lacks impact as a cohesive piece of work, it does have shining moments, with some tracks definitely playing the starring roles whilst others are extras. “Mask Off” has been doing the rounds, but that is as much a result of the flutes on the production as anything else. Not without coincidence, it is one of only two tracks on the album that Metro Boomin’ lent his hand to.

The grunting flow of the first verse on “I’m So Groovy” felt like one of the few moments on the album where I was hearing something new. Tarentino and Future come together to work magic on “Might as Well.” All I need is to hear Future sing over piano-based beats, then I’m a happy man. The same can be said of his joint with Zaytoven, “When I Was Broke.”

I have one person I turn to when talking to about new hip-hop releases, a roommate who never fails to give some insight into an album or an artist that I wouldn’t have previously considered. We’ve been having this ongoing discussion about “FUTURE”, where he will leave for work at mid-day talking about one track, come back eight hours later and pick up where we left off talking about a different tune, without skipping a beat.

We talked about Future consistently making trap songs, songs that keep him embedded in that street life so that he doesn’t get swept away by the pop world that “Turn On The Lights” could have sucked him into.

This conversation in turn led me to think about “Draco,” a song where Future can craft an undeniably catchy chorus whilst rapping about a gun that can fit inside a school bag. What this album continues to deliver is work from an artist who can be at the absolute pinnacle of financial success, yet still so firmly want to keep a foot in the streets.

I’m not sure the same can be said of the hit factory that is “Hndrxx,” but that’s another review for another time.