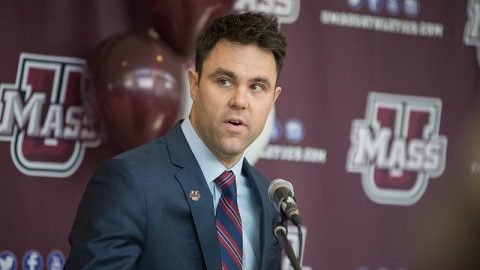 Massachusetts athletic director Ryan Bamford met with the media shortly after 5:30 p.m. Thursday at Mullins Center to discuss the decision by Pat Kelsey to back out his deal to become the next UMass men’s basketball coach.

Bamford was made aware of Kelsey’s decision with a call at 3:25 p.m., just over a half hour before his scheduled presser.

“At 3:30 this afternoon, Pat Kelsey asked to be released from his employment agreement at UMass which was executed on Tuesday. After speaking with Pat about his decision, I honored his request and we are now working through how this impacts our executed Memorandum of Understanding,” Bamford said in his opening statement. “In my conversation with Pat, he made it clear that his reasons were very personal and upon his request, I will honor our confidential conversation. Pat stressed that his decision was not based on the University of Massachusetts or our basketball program.”

“To be clear, this decision is entirely personal and in no way an assessment of the commitment UMass made to me personally or to the resources available at UMass to have a nationally-recognized program,” Kelsey said. “I apologize to Chancellor Subbaswamy, Director of Athletics Ryan Bamford, members of the basketball program and the UMass community who embraced my appointment this week and made me feel welcome since arriving on campus yesterday.”

According to Bamford, Kelsey had met the team last night and had dinner with them in preparation for the planned press conference. The Minutemen players were disappointed with decision by Kelsey when they were briefed on it 10 minutes before Bamford met with the media.

“The students are disappointed, just like I am. But I told our men that we’re going to find a great leader,” Bamford said. “I told them this was on me. As the leader of this organization, this is on me. I take this personally. Finding our next head coach is personal to me because I owe it to the department and our student-athletes to find somebody great.”

With the agreement made on Tuesday, the two parties will have to go through a buyout that would pay UMass for Kelsey’s decision to leave. The first two years of the execution of the contract constituted a $1 million buyout. Bamford could not get into if and when UMass would receive the money because more things need to sort out in regards to Kelsey’s future before that process can begin.

“This is so new and fresh that I want to make sure that we have to sit and talk about that with our university leadership and coach Kelsey and his representatives before we make any legal statement that may impact that,” Bamford said.

Reports are that Kelsey plans to go back to coaching Winthrop, with the university issuing a statement that Kelsey intended to return.

With the news of Kelsey’s change of heart still fresh in Bamford’s mind, he’s not willing to comment on when the next coach will be hired. He wants to take time to digest the decision and then go from there. Bamford believes there are still many quality candidates that will be interested in the job.

“We left things in a great place with anyone who had interest in this position. It’s still pretty fresh so I don’t know,” Bamford said. “We haven’t reached out to anyone and that will happen here shortly. We have some remarkable people who are interested in our job. We’ll go out and find out who remains interested and find the best fit for us.”

In the end, Bamford views Thursday’s events just as “road bump” for the athletic department and is confident they’ll find the right guy to lead the program.

“This is a wonderful athletic department and this is an unbelievable community. We’re going to go find somebody who wants to come here and return us to prominence,” Bamford said. “The interest in this job, as it has been the last two weeks, is strong and we’re going to find a leader who’s going to take us exactly where we need to go and who’s going to represent us and allow our student athletes to have a remarkable experience to allow us to win games and contribute to this community.”