Question and Answer: Trustee candidate Derek Dunlea expects to bring finance knowledge to Board of Trustees 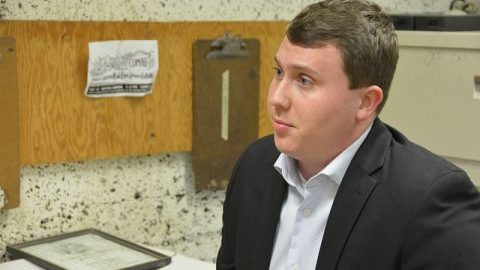 Student trustee candidate Derek Dunlea, a junior political science and economics major, is running unopposed to be the University of Massachusetts campus representative within the Board of Trustees, the legislative body of UMass. The board permits five students, each representing the five UMass campuses and elected through the student body, to vote on general policies governing the University. Dunlea currently serves as the secretary of finance in the Student Government Association.

Here’s the transcript of the question-and-answer in preparation for Sunday’s SGA executive debate from 6-8 p.m. in the Commonwealth Honors College Events Hall. SGA elections will be held from Mar. 6 to Mar. 8.

Derek Dunlea: “A little bit of what I’ve been campaigning on has a lot to do with my finance background. As the secretary of finance, I focused a lot on making sure that fees for students aren’t going up. But the problem is that I don’t have any direct say in that statement. Really, what I can do is observe and report. I go to administrative meetings. Getting involved in the finances specifically is really important to me. A big reason why is because students at this University pay a lot to come here. From 2001 to 2014, it went from 50 percent of students to 75 percent of students who had loan amounts and those loan amounts went up to about an average of $29,000 for people who left the University. That’s a huge increase in that timespan. As student trustee, I will be able to sit down on the budgeting administration and finance committee of the Board of Trustees. UMass will have a vote on the board, so if I was elected to the position, I will have a vote in committee meetings in that board. What that means is when I say I want to vote against fee and tuition increases, I can and that’s exactly what I am going to do.”

DD: “I want to connect more with graduate students. The reality is, especially over the past year, I learned that being a graduate student at this University is very different than being an undergraduate. There’s a whole different host of challenges associated with it. It usually means higher costs to attend the University, less funding opportunities, there’s a lot more research work and there’s a lot of ground work that graduate assistants have to do, they have a harder course load and usually less instructions in that course load. We also have a large international student body here. What is already a tougher transition for being here in Massachusetts specifically is a higher cost of living in the Pioneer Valley that translates hard for graduate students who do not have those funds, which is a lot of our graduate students. I need to be accessible to graduate students. I need to hear their stories. I need to help them with their struggles. In the past, graduates, while not forgotten, haven’t been represented as well. And maybe that’s because undergrads have been representing them. I want to be part of the situation which is to help graduate students as much as I’m going to attempt to help undergrads. I also want to help student activists. Running with organizations like the Center for Education Policy and Advocacy and making sure that those organizations are helped the most and that they have the tools they need is vital. They are the ones that are able to speak for our whole campus. That’s the way we are going to make systematical change. It’s not by sitting in the system, but it’s by helping to change the system.”

How will you communicate with other trustees?

DD: “I’ve been talking to other [student] trustees about this. The biggest thing I heard constantly is being about to caucus with students. As five [student trustees] if we don’t have five votes, we are able to examine and look at our priorities together and be able to mobilize from that. We need to figure out how we feel about certain topics. I heard mixed reviews of [other] trustee members. One of the biggest challenges is being able to caucus with those members and finding allies. I’ve been informed of a few different people who could possibly be allies who are sitting in the board. So, reaching out to those contacts that we already have is vital. But, more from that, is being able to cooperate and work with that.”

As the representative of the Amherst campus, how do you intend to communicate with the student body?

DD: “It kind of goes back to the point I made about graduate and undergraduate students. From what I heard from other people it’s the toughest part of the job. Being able to communicate with student voices and figuring out which are issues you are able to legitimately champion on and fight on and which ones you are going to have to refer to other sources. I’m a resident assistant so I’m used to serving people resources. I’m used to people coming to my door and them asking a question and me not knowing the answer. So, it’s being able to communicate with students and say, ‘Hey, I’m not sure about this yet, but I can forward you to somebody.’ Or, ‘Hey, I’m not sure about this yet, but I think I can help you with this issue and I’m going to do this with A, B or C.’ I can’t be a bandage situation for 26-plus thousand people on campus. I need to be able to be a resource that can be utilized by people. I really want to work on fixing the problems I can fix and not overpromising. The reality is that the whole campus is my constituency and I don’t descriptively represent the campus. I’m a white male in UMass. There are other white males in UMass. There are others that identify differently than me. There are people from different communities who I don’t necessarily agree with their viewpoint, nor am I going to represent their viewpoints and what their struggle has been. But a big part of what I need to do is to be able to reach out to people and to make a coalition of people around to be resources to me.