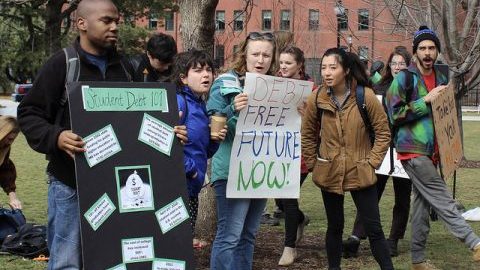 Students rallied outside the Joint Ways and Means Committee public hearing on education on Wednesday to advocate for tuition and fee freezes for the upcoming year.

Members from the Center for Education and Policy Advocacy and The Public Higher Education Network of Massachusetts along with other students wore signs around their necks with student debt written on them and chanted, “They say cut back, we say fight back!” and “Hope you hear us loud and clear, tuition will not raise here” outside of the Old Chapel at UMass, where the meeting took place.

“Some individual students are wearing the amount that they personally are in debt. We’re advocating for how much average students are in debt, which is $30,000,” Timmy Sullivan, a freshman majoring in political science who attended the rally, said. “This is part of the ‘Wear Your Debt’ campaign so that the legislators can see how much students are actually in debt and that they are going to be physically carrying this into their future.”

Erika Civitarese, a senior majoring in communication and the campaign and policy coordinator of CEPA, explained that while the upcoming year’s potential tuition and fee increases may not influence her as a student graduating this year, the policy changes will still have an impact on her life.

“I have a sister who is still in high school, and my family can’t afford to send her to private institutions,” Civitarese said. “So really the only schools that she’ll really even apply to are state universities and such. So I’m still in this fight for my sister, for the future of tomorrow.”

“Right now there are some state legislatures from [Massachusetts] in there, writing their budget for the Ways and Means Committee,” Nathalie Amazan, a freshman majoring in legal studies and political science said. “We’re advocating for them to include tuition decreases and to not increase tuition for us because debt is outrageous…we’re pushing and advocating for legislation and bills that would lower tuition and hopefully work toward a debt-free, tuition-free future.”

According to Civitarese, Chancellor Kumble Subbaswamy and President Marty Meehan gave testimonies at the meeting regarding the UMass Rising Campaign and the need for an increase in funding from the state for the UMass system and for the public higher education system as a whole.

Students and advocates for lowering tuition and fees had the opportunity to give testimonies at the committee meeting, including Civitarese, Nat Roosa, a freshman anthropology major, and Andrew Lawson from North Shore Community College.

Josie Pinto, a senior majoring in public health sciences said, “There should be a school throughout the Commonwealth that can be easily afforded…it’s important to protect rising tuition costs at public universities because this is supposed to be the place where any student can come in theory. It matters that a lot of us have $20,000 or $30,000 worth of debt because that’s a huge burden to graduate with, and I just don’t want young people to experience the burden of debt as much as possible.”

The Executive Director of PHENOM and UMass class of 2015 alumnus Zac Bears explained that there is still time for students to make a difference on the matter.

“The important thing to remember here is, we have four months. The budget probably won’t be finalized until July, so we can do more actions and put more planning into it and start gathering people from across the state to all fight for tuition and fee freezes across the board at all 29 campuses.”