‘T2 Trainspotting’ is messy, inconsistent and entertaining all at once 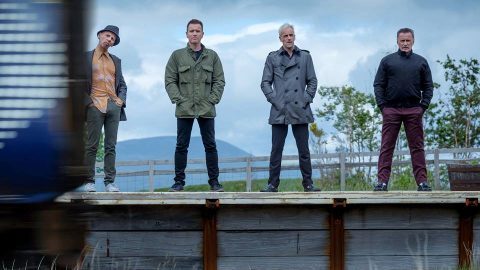 At one crucial point during “T2 Trainspotting,” Mark Renton (Ewan McGregor) is questioned on the meaning of the phrase “choose life.”

Those two words—the centerpiece of the iconic monologue Renton spews out over Iggy Pop’s “Lust for Life” in the opening scene of the 1996 Danny Boyle film, “Trainspotting”—clearly give him pause. Renton then chooses to explain himself by awkwardly stumbling into a second “choose life” monologue.

At first, it’s the farthest thing from natural, as he shoehorns in cringe-inducing references to ubiquitous aspects of modern life (Facebook, Instagram, Twitter) that didn’t exist when “T2”’s now decades-old predecessor shocked the world with its urgent cinematic style and graphic depictions of heroin addiction and urban poverty in Edinburgh, Scotland.

As this second monologue begins to really flow from the mind of the now middle-aged, divorced Renton though, it becomes more profound, and less like B-grade Tumblr material. He touches on dashed expectations, the sort of disappointments and curveballs that have brought him back, more than 20 years later, to the Edinburgh he once explored with his long-abandoned group of outcast friends.

In the way it initially seems so forced, before evolving into a meaningful meditation on aging, the monologue can be seen as a microcosm for “T2 Trainspotting,” a sequel that veers wildly between determined attempts to recreate the dazzling sensations of its predecessor, and even more forceful attempts to establish itself as an emotionally charged caper of its own. Unfortunately, these unpredictable swings tend to overshadow the formidable strength of the film’s four main characters, and the performances that power them.

Renton, returning to Edinburgh after 20 years in Amsterdam and a recent heart attack, doesn’t take long to reunite with the unforgettable motley crew he so brazenly betrayed (by stealing a bag full of cash from a drug deal that they were to split evenly) decades before. Simon “Sick Boy” Williamson (Jonny Lee Miller) has merely moved from heroin to cocaine addiction. Spud (Ewen Bremner) is still a hapless junkie, only he’s now burdened by his failure as a provider for his ex-wife and estranged son. Newly escaped from prison, Franco Begbie (Robert Carlyle) is as ruthless as ever, and still has Renton square in his crosshairs all these years later.

Though Boyle indulged in a few now-legendary dream-like sequences in “Trainspotting” to simulate some of the key phases of Renton’s struggle with heroin (the high, an overdose and withdrawal), his style was otherwise bracingly spare. This gave Renton’s gang of “so-called mates” room to make the comparatively minimally plotted film a remarkable experience, coloring otherwise mundane situations with their hysterical, disturbing and insolent actions and dialogue.

For “T2” though, rather than taking the less-is-more approach he took with “Trainspotting,” Boyle busies himself with countless, off-putting Dutch angles, strange color palettes, honest-to-god action sequences and jarring transitions. With these effects, Boyle tries to force the head rush that so naturally came by viewing the original, and often obscures the characters’ charisma.

Boyle and screenwriter John Hodge also spend too long justifying why exactly the ol’ gang have gotten together again. “T2” takes you on an unwieldy journey through Simon’s efforts to get Renton to partner with him in an effort to obtain European Union funds (making the film feel already unfortunately dated) for a planned brothel, the unpredictable allegiances of Veronika (Anjela Nedyalkova)—a Bulgarian prostitute whom Simon relies on to blackmail rich, influential men—and Begbie’s attempts to bond with his teenage son, packed in all the while with numerous references and callbacks to the original.

Consequently, it’s only when “T2” feels unconcerned with style, atmosphere and plot that it begins to approach the sharpness of “Trainspotting.” Its best moments come when Renton and Simon, who still have, despite all their many betrayals of one another, the telepathic chemistry that only best friends can have, are let loose. Whether the two are boring Veronika with their breathless, drunken banter about politics and football or making up a brutal, sectarian song at a Protestant, Unionist bar in order to blend in enough to steal the credit cards of the wealthy clientele, these more carefree scenes will undoubtedly stick more than those that emphasize the particulars of Simon’s and Veronika’s plan or Begbie’s domestic issues.

McGregor, Miller, Bremner and Carlyle all slide back into their (aside from McGregor’s turn as Obi-Wan Kenobi) most famed roles with incredible ease. Where Carlyle—who so came to life in Begbie’s acidic diatribes and breathtaking acts of psychopathic violence—stood out in “Trainspotting,” Bremner wins the day in “T2.” He makes Spud, the sympathetic loser of “Trainspotting,” the lovable heart of “T2,” with his vitality and morality providing a refreshing, wonderful contrast to the often dour outlooks of his friends.

In a way, one can see the messiness of this film as fitting. Two decades after the protagonists, a rag-tag group if ever there was one, stumbled into the drug deal that would push them apart, they remain as lost as ever. Like the film itself, they don’t know what side of themselves to embrace and what parts of their past they should celebrate or try to forget entirely.

It’s often a pleasure though, all the many visual, plot and pacing hiccups aside, to watch these four incredible characters come to life again, and try, once again, to discover their purpose.