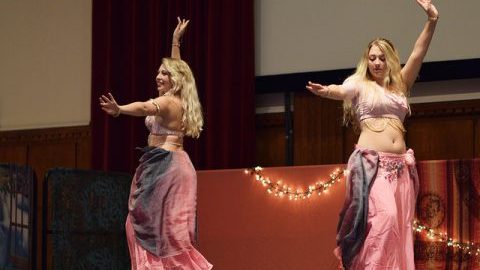 The Fine Arts Center will be the site of convergence for a dazzling array of movements, talents and people this Saturday. The MoveMeant, billed as a “mixed movement art” performance showcase, will bring to audiences athletic and artistic disciplines ranging from dance to martial arts to circus acrobatics.

UMass’ own sports and dance registered student organizations will be sharing the stage alongside professional acts from Boston and New York. This unique event is the brainchild of two UMass alumni, Thomas “Tommy” Kincaid (’15) and Allison Dancewicz (’15), who are united in their fascination with movement.

The duo founded The MoveMeant in 2016, when they debuted the event in North Andover to a positive, albeit relatively small, reception. From then on, their desire to bring stories to life via the medium of the human body has only grown. With 116 performers and a plethora of styles, the variation in this year’s show is dizzying. It’s hard to pin down exactly what this night will entail, but what better way to understand it than to know its origin?

Just as The MoveMeant is impossible to pigeonhole, so are its two creators. Kincaid is a lifelong mixed-martial artist who turned his passion into an academic career under the BDIC program. It was in reaching out to UMass’ dance faculty for advising in creating his martial arts major that he was first exposed to dance, and with it, “movement culture,” a teaching emphasizing the underlying concepts across all movement forms.

“You kind of start to see how movement systems are put together, kind of blurring the lines between them,” Kincaid recalled. It wasn’t until his first foray into choreography though, that he started to construct hybrid performances using martial arts and dance, most notably through a rendition of Plato’s “Allegory of the Cave.” The urge to continue choreographing drove him to create his own show after he graduated, when he conceived of The MoveMeant.

Optimistic about this year’s show, he hopes that the audience will broaden their perspectives as he did. “I really want the audience to think past things like labels, and see the deeper level that is just movement.”

Kincaid’s vision is hardly conventional, but classically-trained dancer and co-creator Dancewicz is unruffled. If anything, she’s also embraced the melding of different movements and has found a deep personal investment in shaping The MoveMeant. Dancewicz has been dancing since age two and graduated from UMass in 2015 with a BFA in dance and a BBA in management.

Like many dancers, she found herself struggling to find a balance between her many interests. Currently a full-time application sales representative at Oracle Corporation, she finds her involvement in The MoveMeant to be very fulfilling.

“It’s a really great way to keep dance in my life,” she said.

When Kincaid approached her and other former classmates about his idea, she was immediately gung-ho about the project. Her years of experience not only as a dancer and choreographer but also as a coordinator and leader made her a perfect showrunner.

Like Kincaid, she also echoes the idea of “blurring the lines between the moves of different styles.” For Dancewicz, a crucial goal is to bring together acts from all across the spectrum of movement. “The show itself is about collaboration between all the movement forms; people can share the stage with people they otherwise never would have shared the stage with,” she said.

It’s clear that Kincaid’s and Dancewicz’s dedication lies in their sense of community as well as their craft. For 2016’s The MoveMeant, profits from ticket sales were donated to the New England Foundation for the Arts. Both cofounders have decided that the proceeds from this year’s show will go toward the Bowker Auditorium renovation project. “I think it’s important to keep supporting the arts, and to make sure students have a platform to keep going,” Kincaid said.

“We felt like we wanted to do something that hit a little closer to home, and in that way motivate our performers to give it their all and encourage the community to come out,” Dancewicz added.

“Bowker itself is a living legacy and we want to do as much as possible to keep that place open for the community and the students.”

To ensure that the connection between generations of UMass students stays strong, Dancewicz and Kincaid are collaborating with the UMass Belly Dance Club (UMBDC) to co-host the show. Liz Tripp, who is coordinating, choreographing and performing in The MoveMeant, acknowledged the efforts of the two co-directors and the UMBDC leadership board.

“There is a lot of organization to pull off this event, and I can’t say I’ve done this alone,” Tripp said. “Tommy and Allison have been amazing, as well as the leadership board of the Belly Dance Club. They’ve been so crucial in pulling this off.”

The endless rehearsals and social media blasts have not dampened her excitement for performance night, though. “We’re offering a crazy lineup that’s going to be so entertaining…it’s going to be a diverse array of movement art,” she said.

Diverse is certainly one word for it. Through Dancewicz’s and Kincaid’s ties to their respective professional spheres, audiences will be treated to performances in cyr wheel, freestyle calisthenics, pole dancing and boxing, to name a few.

Don’t be too quick to deem The MoveMeant a mere variety show, though. It promises to be a fresh, authentic take on the entire scope of movement that aims to do away with constraining categorizations. “What our show has done is entertainment that will tickle anyone’s fancy,” Dancewicz said. “It’s something that really never has been done before.”

In describing the impact The MoveMeant has had on him, Kincaid said, “You don’t think of yourself as your art, you think of yourself as you as a human, who moves in these ways.” Not having an interest in dance performances shouldn’t be an excuse to not attend, as The MoveMeant looks to bring movers of all kinds together in celebration of their craft.

The MoveMeant starts at 7:00 p.m. at the Fine Arts Center on Saturday, March 25. Tickets are available at the door or online ($5 for students, $10 general admission).

Sam Wong can be reached at [email protected]