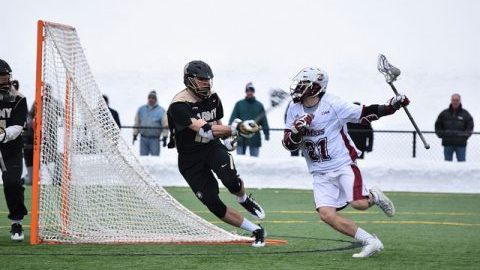 After four straight losses to begin the season the Massachusetts men’s lacrosse team needed somebody to step up, and sophomore attacker Tyler Bogart and senior goalie D.J. Smith both delivered.

Over the past three games Bogart’s offensive game has come alive, scoring 11 goals and tallying two assists. It’s not a coincidence that Bogart’s improved play has overlapped with UMass’ (3-4) three game winning streak.

Bogart attributed his increased goal output to a new mindset, approaching the game with fearlessness.

“No fear is what I kind of live by,” Bogart said. “I’ve been kind of been preaching that to the guys on the team too. You can’t have fear on this level. Everyone is unbelievable, every team we play, you know the offenses and the defenses we go against, you just got to go to the net, not be afraid of anything or anyone and that’s what we’ve been kind of doing and it’s been working.”

The change in mindset has already made an impact on the scoreboard, as the Minutemen have scored in double figures in each of the past three games after not reaching the 10-goal mark once over the first four games.

“I mean it’s definitely showing on the scoreboard now, coming out with big wins,” Bogart said. “Once you just go to the net and you play really hard with no fear, things start going for you and once you start getting shots on and you keep that pressure on their defense, it kind of gets them on their heels and we set the pace of the game and I think that’s the biggest thing that’s been changing.”

UMass coach Greg Cannella has seen Bogart take his play to another level after his change in mindset.

“He has always had that knack for scoring and skill to score and get inside and be really tough so it was more of I think him really making that decision,” Cannella said. “He had a fine freshman year and was just figuring some things out here in the fall and came back in the spring and kind of the same thing. He came to us and said, ‘hey guys I’m good to go now,’ and he’s showed that to his teammates every day in practice.”

On the other side of the field Smith has led the defense with his strong play in the cage all season. Smith has started all seven games and played all four quarters in each game except for seven minutes in the game against Albany when the score was out of reach, tallying 75 saves and allowing 72 goals on the year.

“I’ve seen some very good goalies in my short life but he is definitely top tier,” Bogart said. “He is playing on his head, unbelievable. Not only him but our defense is playing lights out they have saved us in many games this year. D.J. is making some incredible saves, saving us in these games.”

While Cannella said Smith has played well in the cage, he pointed out the senior’s increased leadership role as being a big boost to the team.

“D.J. has been a strong leader all year from the fall through the spring time,” Cannella said. “Obviously he’s a captain, that kind of elevates his opportunity to lead, and as the starting goalie it elevated his opportunity to lead as well. He’s done a really good job leading but he’s also played very well for us in the cage.”

After switching off last year and mainly playing in just one half of the game, Smith appreciates the chance to be on the field with his teammates for all four quarters.

“It’s good to really stay invested the entire game because it’s tough sometimes when you play a half and then you come out to stay invested on the sideline,” Smith said. “I worked at that last year but it’s cool to be in the game the whole time and have my teammates count on me the whole game.”

The Minutemen will look for Smith and Bogart to continue to produce at a consistent level and extend the win streak to four games when they host Brown on Saturday.