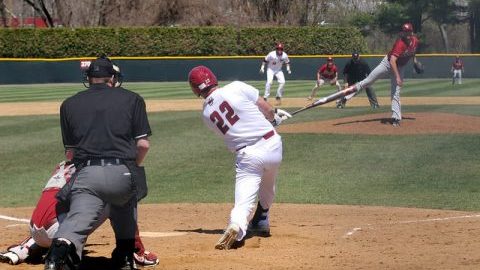 Execution is key for the Massachusetts baseball team, as it heads into a stretch where it will play eight games in eight days against plenty of stiff competition.

UMass (0-3) will first travel to Maine to take on the Black Bears (5-5) in a three-game set beginning Friday. The Minutemen were swept in their first series of the season against Elon last weekend while Maine has won five of its past seven games.

“We need to execute our short game. Simple as that,” UMass coach Mike Stone said. “We came close to winning a couple games against Elon. We were four outs away in the first game with no one on base. A win would’ve been huge but we can’t dwell on it and need to concentrate on the next game.”

Stone felt the biggest thing for his team moving forward into this stretch was seeing more pitches, more breaking balls and being able to execute. It was something the Minutemen struggled with in its series against the Phoenix. UMass scored four runs in three games while being outscored 12-4.

In the season opener, the Minutemen took a 3-1 lead into the eighth inning before surrendering two runs and falling on a walk-off in the bottom of the ninth. One takeaway from last weekend, despite being swept, was the strong starting pitching the team received.

Sophomore Justin Lasko started the first game for UMass, going seven innings, allowing one run on five hits to go with four strikeouts and four walks. Brooks Knapek took the mound in game two, allowing two runs in six innings while striking out 10. However, the Minutemen’s offense failed to score any runs for the freshman.

In the final game, senior Mike Geannelis took the mound and continued the strong string of starts for UMass. Geannelis was the third pitcher to go at least six innings as he went for seven innings, allowing two runs while striking out nine.

However, it was the bullpen that let the games slip away. Junior Kevin Hassett, who had a strong sophomore season, struggled in his 2017 debut surrendering two runs in the eighth inning against Elon. He was followed by freshman Christian Rosati who allowed the game-winning run to cross the plate.

With the Minutemen down 2-1 heading into the eighth inning of the final game over the weekend, Casey Aubin allowed three runs, blowing the game open for the Phoenix.

“We have a lot of young pitchers so it was good to get their feet wet,” Stone said. “We have more in the tank, I know they can and will be better, it just takes time [with so many young guys.]”

Maine’s top offensive player in the early going, Christopher Bec, is sporting a .375 average with 10 runs and seven doubles in 10 games. He leads the team with seven runs batted in.

On the pitching side, Nick Silva has posted a 0.95 earned run average in his first three starts of 2017. In 19 innings, Silva has allowed just two runs on 13 hits while striking out 16.

The bullpen has also been exceptional for Maine. Senior Jeff Genilas and freshman Matthew Pushard have yet to allow a run in a combined 8.2 innings. Cody Laweryson and Zach Winn each have an ERA under three out of the bullpen.

“We need to come out ready to play, bust our butts and execute,” Stone said. “It is really a matter of executing, playing hard, believing in ourselves and in the situation and preparing well. It is really a simple formula.”

First pitch is scheduled for 10 a.m. in Delray Beach, Florida.

Tyler Fiedler can be reached via email [email protected] and followed on Twitter @Tyler_Fiedler.