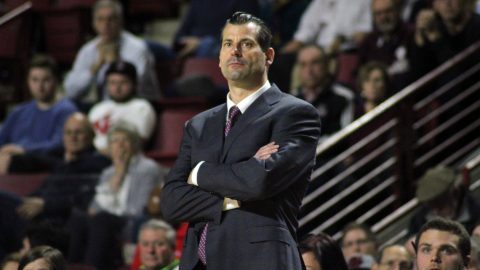 Less than two hours following UMass men’s basketball’s loss to St. Bonaventure in the Atlantic 10 Tournament, Bamford made the decision to fire head coach Derek Kellogg after nine seasons with the program. ESPN’s Jeff Goodman had the initial report before UMass released a press release following the game.

“Decisions like this are always difficult but after a thorough review of our men’s basketball program, I believe that a leadership change is needed to realize a higher level of competitive success expected at the University of Massachusetts,” Bamford said.

UMass suffered back-to-back losing seasons and were 46-51 in the three years following its run in the NCAA Tournament during the 2013-14 season.

Kellogg took over the head coaching position prior to the start of the 2008-09 season and finished with a 155-136 record during his nine years.

“I want to thank Derek for his unwavering commitment to UMass basketball as both a student-athlete and our head coach,” Bamford said. “Derek will always be a Minuteman and we wish him and his family well in the future.”

UMass has hired Folger Consulting to assist its coaching search. Former Associated Press National Coach of the Year Eddie Folger will assist during the process.