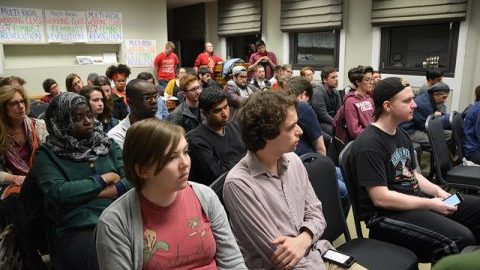 A University of Massachusetts group hosted a panel discussing the role of coalition building to resist President Donald Trump’s policies in the Campus Center Wednesday.

Soon after introducing themselves, the speakers began to take questions from the audience, most of which were initially about the failures of the Democratic Party this election year.

Stetson, a member of UMass Democrats, admitted to the mistakes Democrats made in addressing race.

“There are flaws in our party when it comes to these conversations,” Stetson said. “And we, as Democrats, cannot say we have democratic values if we ignore identity politics.”

In terms of resisting everyday racism and discrimination against people of color, Sogoba, a member of the Muslim Students Association, spoke about the importance of humanization.

“The easiest thing to do is to humanize each other; white supremacy is fueled by our ability to dehumanize one another, so if you go around and ensure that you’re acknowledging that [someone] is another person that is revolutionary,” Sogoba said.

Sogoba also talked about the importance of being open to criticism when resisting.

“You can’t expect everyone to be nice to you when you keep dehumanizing them,” Sogoba said.

Sogoba also asked the audience to understand where anger from marginalized groups stems from, pressing them to look internally into how they can be a better ally.

“I will admit, I was a little surprised about the route that we took, but I think that was a function of the movement being a living, breathing organization that we will make errors and when that happens it is our ability as an organization to say we should do something different,” Sexton said.

Sexton also talked about the responsibilities of having privilege in this country, saying that it requires a certain level of “risk,” and that we must risk being on the front lines with our “brothers and sisters” in struggle.

“The history of struggle is one of which the least privileged amongst us have been leading the way and it is incumbent of us who have more privilege to follow their example,” Sexton said.

The conversation then shifted to the effects of climate change. Boucher, a member of UMass Climateers, spoke specifically on the Dakota Access pipeline and the Flint, Michigan water crisis, both which have affected people of color.

“The Climateers have joined the coalition for solidarity and to be here for other organizations and to support other people in every way that we can and to make our fight more intersectional,” Boucher said.

The panel also addressed the lack of diversity within many of the organizations on campus. Many of the audience members pointed out the fact that issues of race within coalition clubs need to be discussed to create a sense of intersectionality.

At the end of the event, audience members were given a chance to contact or join each of the respective clubs at the panel.