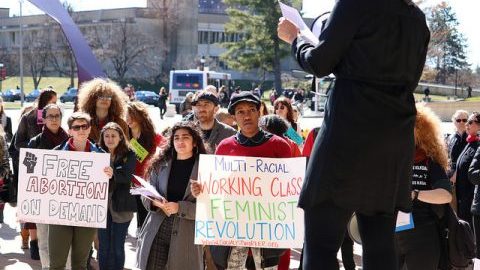 An estimated 100 people gathered at the University of Massachusetts Wednesday to march in resistance of President Donald Trump on International Women’s Day. The march, orchestrated by the Coalition to Resist Trump’s Policies, began at 12 p.m. outside the Fine Arts Center and saw speakers from various campus organizations.

Kate Nadel, a UMass alumna and member of ISO said that about two weeks’ worth of planning went into the rally.

“We thought it was really important because we know that Trump…his rhetoric and his administration have been targeting a lot of marginalized oppressed groups, particularly women, particularly people of color, particularly Muslim people. We wanted to use International Women’s Day to highlight some of the issues that we’re facing,” Nadel said.

Ramona Faris, a junior studying psychology, represented the Arab Student Association and spoke about her experiences as an Arab woman.

“You’re taught to bite your tongue as a Middle Eastern woman, in fear that when you bring up misogyny or other issues within your community, that you’re trying to discuss with only people of your community, because you’re afraid of others using your words to defend their racist beliefs,” she said.

Gaelle Rigaud, a junior studying English and Afro-American studies and a member of BSU said, “Some days I feel like no one will ever hear me, unless I’m a Black man or white woman.”

More speeches took place once the crowd marched to Goodell Lawn carrying posters and chanting, “When women’s rights are under attack what do we do? Stand up fight back!” and “No Trump, no KKK, no fascist U.S.A.”

“The United States is one of the only countries in the world that does not guarantee paid time off for new mothers,” Sonia Guglani, a sophomore economics and finance major and member of UMass Democrats said. “Only 13 percent of new mothers in this country are guaranteed paid time off from their employers, and that number is way too low.”

Associate Director of Counseling and Rape Crisis Services Becky Lockwood spoke for the CWC on Metawampe Lawn, where the march concluded just after 1 p.m.

“We know that the liberation of women can’t be separated from the liberation of everyone in our community. We are all people and just as I cannot separate out my identity as a white woman, a queer woman, a mother, a college graduate, neither can we separate out gender from race, or class, or gender expression, ability, age or sexual orientation,” she said.

Nadel is hopeful that the march and rally will spark interest in those who may not be currently involved in the fight for justice of all people.

“This isn’t just going to be a Muslim ban, an attack on Planned Parenthood. It’s going to be consistently targeting people who are marginalized and oppressed. And we need to stand together and have that kind of solidarity network ready.”

“I think [International Women’s Day] is important every single year, but I think this year more than years in the past, especially for our generation, Trump’s election has in a way woken everyone up to realizing that all of these issues of transsexual rights, mass incarceration, LGBTQ rights, Black Lives Matter, women’s rights–they’re all connected and we all need to come together to address these issues,” Celeste Blodgett, a senior psychology major who attended the march said. “I think days like this, International Women’s Day, provide us an opportunity to all come together and all hear each other’s voices and start to open up that dialogue and to understand different perspectives.”