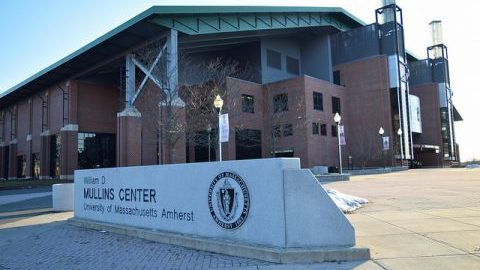 “I am thrilled to welcome Pat Kelsey and his family to the University of Massachusetts,” Bamford said in a press release. “Pat has been an important piece of some highly-successful programs throughout his career, including the last five years leading the basketball program at Winthrop University. Coach Kelsey has a detailed plan for every phase of our program and a passionate work ethic providing fuel to reach our goals of building a championship-caliber program.”

Kelsey has spent five years at the helm of the Eagles, compiling a 102-59 record (.634 winning percentage). Winthrop was the Big South regular season and conference tournament champions with a 26-7 record before losing to Butler in the first round of the NCAA tournament and Kelsey’s lone trip to the big dance this season. The Eagles won the Big South regular season championship twice in Kelsey’s tenure. He previously worked as an assistant coach of his Alma Mater Xavier and at Wake Forest before becoming the Winthrop coach.

“Lisa and I are thrilled to be joining the UMass family and the Amherst community,” Kelsey said in the release. “UMass is a national college basketball brand with a proud, powerful tradition. As a player in the A-10, I saw first hand what the potential is there. I look forward to the challenge of making UMass a major factor on the national level once again.”

The news broke after rumors were swirling about a potential job for Celtics assistant coach Micah Shrewsberry. The Vertical’s Adrian Wojnarowski reported early Tuesday morning Shrewsberry emerged as a “serious” contender to become the Minutemen’s next head coach after having met with school officials earlier this month, with a second interview on the docket.

The Boston Herald’s Rich Thompson and 98.5 the Sports Hub midday host Marc Bertrand reported early Tuesday afternoon that Shrewsberry was in fact out of the running to be the team’s next head coach, and was no longer on Bamford’s short list before ESPN’s Jeff Goodman and the Daily Hampshire Gazette’s Matt Vautour reported the team hired Kelsey Tuesday afternoon.

Kelsey will take over for Kellogg after the Springfield, Mass. native spent nine seasons in Amherst, posting a 155-137 record (.531 winning percentage) with one trip to the NCAA tournament in 2014.