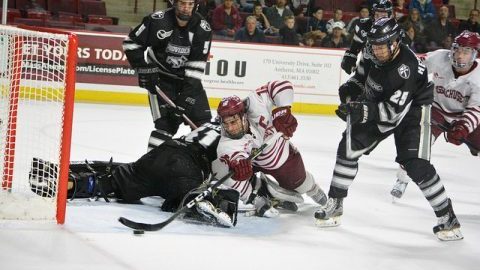 The Massachusetts hockey team will be facing No. 10 Providence for the third, fourth and potentially fifth straight time this weekend as the Minutemen (5-27-2, 2-19-1 Hockey East Association) get set to take on the Friars (20-9-5, 12-7-3 HEA) in the first round of the Hockey East Tournament.

This three game series will take place entirely at PC’s Schneider Arena in Providence, as the Friars hold the fifth seed in the bracket and UMass the 12th.

The Minutemen’s most recent trip to Schneider on Feb. 25 resulted in a thrilling overtime game that ended with UMass’ 15th straight loss in a 2-1 defeat.

However, the Minutemen’s ability to hang with a team as strong – particularly on defense – as PC, which holds the third best scoring defense (2.29 goals per game) and is tied for the second best penalty killing unit in the conference at 85.6 percent, has given the team some confidence.

“To be able to go into Providence and play that team into overtime, for us it’s almost like a win because we haven’t won a game in a long time,” UMass coach Greg Carvel said. “They’ve got a really good team, a top 10 team in the country, and we played them tight. It gives us a little bit of confidence going into the playoffs.”

Carvel and the Minutemen have recognized throughout the season that this is the start of a rebuild. It hasn’t diminished the effort on the part of UMass, but it may have relieved some of the pressure when not much was expected of them. That will change come this weekend.

“I love these situations because it reveals a lot about these kids and their make-up,” Carvel said. “We’ll find out which kids really have the character, and who are the kids that can rise to the challenge. It’s easy to play when you haven’t won a game in months and there’s no real expectations, but we’re going into this series thinking we can play these guys hard and find a way to win.”

In order for the Minutemen to have a chance against the Friars, one player that will have to be on his game is freshman goalie Ryan Wischow.

Wischow was an integral part of pushing the Friars to OT in the last meeting with 40 saves. Following the opening goal by PC’s Garrett Gamez just 4:46 into the game, he kept the Friars out of the net for nearly 60 minutes and denied PC at every turn, including keeping the Friars off the scoreboard in each of their eight power-play chances.

Wischow will be part of a Minutemen team that will be comprised largely of freshmen who will be exposed to postseason hockey for the first time in their young college careers.

“We’re going to dress quite a few freshmen in this game with the understanding that we’ve spent the entire year trying to teach and develop,” Carvel said. “This will be the best stage for the younger kids on our team. Hopefully we’ll play as many playoff games as we can, because it’s the best form of education this group will get.”

Given the rebuild and overall youth of this team, it’s relatively apparent that this post season for UMass is largely about building towards the future. Each playoff game will be another step in the learning curve for the entire program at this stage.

Puck drop for the first game of the series is set for Friday at 7 p.m.