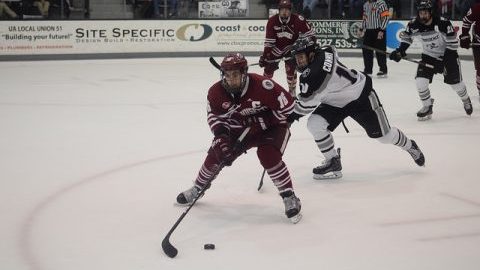 The 3-0 loss in the first of a three-game series for the Massachusetts hockey team against No. 10 Providence was shades of UMass’ performance back on Feb. 3 against Boston University.

The first period saw the Minutemen (5-28-2) struggle to gather any momentum or consistent offensive-zone pressure against an incredibly stout Friar (21-9-2) defense.

“I don’t think it’s about how young we are. I think it’s a mark of where we are as a program,” Carvel added.

Not even the man advantage in the first period could help UMass, as both power plays for the Minutemen in the period resulted in a combined one shot on goal.

UMass finished the period with only four shots reaching the net after the opening period as Providence’s advantage in size and strength showed in the first 20 minutes.

“Their defensemen do a better job boxing out our small forwards and their big forwards found ways to find the back of the net and won the scrums around the net,” Carvel admitted after the game.

While the Minutemen provided little pressure on PC goalie Hayden Hawkey (22 saves) in the first, UMass goaltender Ryan Wischow (32 saves) was forced to put on an acrobatic display in the crease throughout the game.

Wischow faced 12 shots in the opening period, turning away 11. The lone goal in the period came from Friar forward Brian Pinho deflecting a shot from Josh Wilkens at the back post to make it 1-0 – proving to be the game-winning goal as well.

Much like the game against BU, following the first intermission, the Minutemen came out playing a much faster and more physical game.

Within the first minute, UMass began its attack in the offensive zone from the point with defensemen Ivan Chukarov and Jake McLaughlin commanding the blue line.

he Minutemen began attacking the net with more bodies and more conviction as they increased pressure on Hawkey significantly in the second period with 12 shots. UMass would finish the game with 22.

While this turn in momentum made the game interesting through the final two periods, UMass could not convert any of these shots into goals.

“We’ve played them three games in a row and I felt like every game in the second period we found our traction, carried the play and created opportunities but we can’t find ways to get the puck on our stick and get it behind their goalie,” Carvel said.

The final five minutes saw the Friars pull away with a pair of quick goals to seal the 3-0 victory.