UMass Hydro to grow fresh produce for students year round 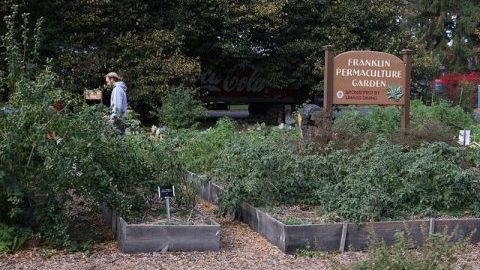 If you look out of the campus-side windows in Franklin Dining Commons after the sun has gone down, you can see a mix of white, blue and magenta lights illuminating the inside of the Clark Hall Greenhouse.

These lights mark the home of the UMass Hydroponics Farm Plan, where Dana Lucas, a junior sustainable food and farming major, and Evan Chakrin, a nontraditional student majoring in sustainable horticulture, have been working throughout the winter growing fresh leafy greens.

Back in December, the duo received a $5,000 grant from the Stockbridge School of Agriculture to grow produce year-round on an on-campus hydroponic farm. Hydroponics, a method of farming with water and nutrients in place of soil, allows for a continual harvesting cycle.

Along with limited pesticide use and saving 90 percent more water than a traditional farm, the farm will produce approximately 70 heads of lettuce a week, every week of the year. Lucas and Chakrin emphasize the importance of this perpetual cycle in meeting the University’s sustainability efforts.

On the University of Massachusetts website, it states, “The University recognizes its responsibility to be a leader in sustainable development and education for the community, state and nation.”

“I don’t know how we can say our food is sustainable at UMass if it’s only grown 10 weeks of the year in New England,” Lucas said.

The location allows UMass Hydro to get their greens across campus by either walking, biking or driving short distances, leaving almost no carbon footprint.

“I think this is something that really excites me and Evan because we really see a demand for fresh, local food and this is a way to actually fulfill it,” Lucas said.

Although the farm’s production capacity cannot currently meet the needs of the dining halls, Lucas and Chakrin are looking into alternative options to get their greens on the plates of students.

“We’re kind of just centering on student businesses right now because they’re smaller and they’re run by our friends, so we can easily get into the market,” Lucas said.

Their first official account is with Greeno Sub Shop in Central Residential Area.

Last week, Greeno’s hosted a special where UMass Hydro’s microgreens were free to add to any menu item.

In a statement posted to their Facebook page, they stated, “One of the goals of our mission statement is to source locally whenever possible, with UMass Hydro right down the hill, this is almost as fresh as it can get.”

Chakrin and Lucas are currently working on getting their greens served at other on-campus eateries.

In addition to adding more accounts, there is a strong focus on getting other students interested in the emerging field of hydroponics.

“We can use this as a teaching facility for students. The techniques we’re using are used in multi-acre industrial greenhouses for lettuce, so we could scale right up potentially,” Chakrin said.

The two are hoping to work UMass Hydro into the curriculum in Stockbridge, allowing students to work hands-on with the systems while also earning credits.

“Maybe we can do a one credit, half semester thing or something,” said Chakrin.

“There has been some discussion about having an accredited course for next fall where we can teach what I’m assuming are mostly going to be Stockbridge students, but we’re open to anybody and everyone who’s interested in getting involved with hydroponics,” Lucas said.

The grant covered the cost of seeds, equipment and other miscellaneous items like scissors, but the responsibility of building the farm fell entirely on Lucas and Chakrin.

“It felt really cool that we were given this much responsibility I feel like, to just buy the stuff and then build it,” Lucas said.

Chakrin noted how one of the biggest obstacles faced in getting the project off the ground was finding an available space on campus.

“Initially we were just asking for a 10-by-10 closet somewhere, then our professor was like ‘Do you think this greenhouse will work?’ and we were like ‘Of course!’” Chakrin said.

“He kind of posed it as a bummer that we weren’t going to be in a closet and we were like ‘No, no, no that’s fine!’” Lucas said, laughing.

“Without the space, none of it would be possible, so being allowed to use this space is just huge and we’re so lucky to have that,” Chakrin said.

Out of the entire space granted to UMass Hydro, only a portion of it is currently being used.

In order to make use of the underutilized space, Chakrin and Lucas are hoping the future of UMass Hydro involves more funding.

“We want to see Dutch buckets and a vertical system in here so we can show students the breadth of what you can do with hydroponics,” Lucas said.

Visitors are encouraged to stop by at the Clark Hall Greenhouse on Tuesdays between 3 p.m. and 7 p.m.

Callie Hansson can be reached at [email protected]