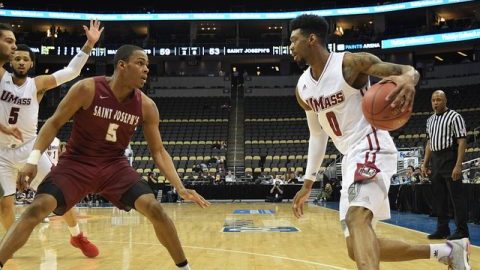 That’s how long the Massachusetts men’s basketball team has from the time the Minutemen stepped off the court following their survival against Saint Joseph’s in the first round of the Atlantic 10 Tournament to when it tips off against St. Bonaventure Thursday afternoon in the second round.

After narrowly escaping Wednesday night’s contest with a 70-63 win, UMass has already put the win behind itself and has turned its full attention to the No. 5 Bonnies, who received a bye in the first round of the tournament.

With such a quick turnaround, the Minutemen won’t have the luxury of doing extensive scouting and walkthroughs. Instead, they will rely on themselves and how they execute their sets.

“There’s not that much preparation,” UMass coach Derek Kellogg said of game planning in conference tournaments. “The good thing is we play a lot of players and we’ve done that all year. [C.J. Anderson] played 35 [minutes] but everybody else was under 30, and sometimes it’s not all bad for a quick turnaround.”

Despite the short rest, UMass does have the luxury of recently facing St. Bonaventure, as the two teams met in the regular season finale last Saturday, as the Bonnies edged out 60-56 victory.

“It’s good because we just played them so we had time to practice for them,” DeJon Jarreau said. “We just worked on triangle-and-two and box-and-one; things we can do against Jaylen Adams and [Matt] Mobley because they’re the best players on that team.”

In the Dec. 30 meeting in Amherst, the first A-10 game of the season, guards Jaylen Adams and Matt Mobley combined for 52 points as the Bonnies came away with an 89-77 victory.

Adams, who was recently named first-team all-conference, finished second in the A-10 in scoring, averaging 20.8 points per game. Mobley, who made the all-conference third team, finished fourth in the league with 18.9 ppg.

“We’re not worried about [Wednesday’s] game anymore,” Jarreau said. “We just have to worry about St. Bonaventure. We’re going to game plan about them and just try to get this win. Win five in a row.”

Unlike Jarreau, the older veterans on the Minutemen have had the experience of playing multiple games on consecutive nights in previous conference tournaments.

“It’s survive and advance. It’s all-or-nothing. That’s why we’re here,” Zach Lewis said. “We’ve been preparing for it and we’re ready for this moment, so now we’re just trying to win and keep it going.”

Anderson added, “I’ve been saying the same thing, as soon as we got in the locker room, [we] just stay focused and locked in there for the next game.”

Last season, UMass advanced one round into the quarterfinal after it defeated Rhode Island on March 10. The last time the Minutemen won multiple games in the tournament was in 2012-13 when they defeated George Washington and Temple before falling to Virginia Commonwealth in the A-10 semifinals.

“We’ve played in the tournament before, advanced a few games,” Kellogg said. “Each team is different. I think my team wants to come and play. I think they will be engaged and want to compete and go against a very good St. Bonaventure team who has beaten us twice.”