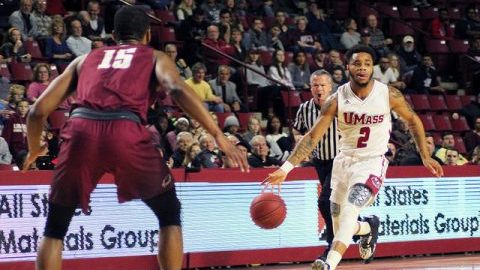 To say the regular season didn’t go as planned for the Massachusetts men’s basketball team would be an understatement. UMass had an Atlantic 10 conference winning percentage of .286; its worst winning percentage in conference since its 3-11 mark during the 1981-1982 season when the Minutemen called the Eastern Athletic Association home.

To put this in perspective, the last time UMass (14-17, 4-14 A-10) struggled this much in conference play, current Minutemen coach Derek Kellogg was just eight years old and the team was still 11 years away from playing their games in the Mullins Center.

If there was ever a time that UMass needed a clean slate, this would have to be it. The Minutemen will look to reverse their misfortunes as they head to Pittsburgh for the A-10 tournament Wednesday at the PPG Paints Arena.

Kellogg isn’t going to put too much stock into the “fresh start” aspect of this week’s tournament and feels like his team’s play as of late will give them confidence when they lace up their sneakers for their opening round matchup with Saint Joseph’s.

“I think the guys are excited to play,” Kellogg said. “We’ve played pretty well at times as of late because I think the guys are still engaged and ready to go. The one positive about college basketball is that the games keep coming and now everyone in the country has an opportunity in front of them.”

The Minutemen and the Hawks have met twice this season with both games going UMass’ way in the win column. The first matchup came in Amherst on Jan. 18 when the Minutemen topped St. Joe’s 62-57. UMass again topped the Hawks 87-76 a few weeks later in Philadelphia.

St. Joe’s has been hampered by the injury bug throughout the season with their top scorer Shavar Newkirk missing almost two-thirds of the season with a torn ACL he suffered against George Washington in December. One of the guys who had taken over the scoring load from Newkirk was Lamarr Kimble, who is out for the season as well after suffering fracture in his left foot.

Forward James Demery is the highest-scoring Hawks player that is healthy, averaging 14.1 points per game. Fellow forward Charlie Brown is second on St. Joe’s with 12.8 ppg.

Despite the setbacks the Hawks have faced, the Minutemen are not planning on taking St. Joe’s lightly come Wednesday.

“They’ve changed a bit throughout the year, kind of like we have to figure out the best way to give their team a chance to win,” Kellogg said. “I think some guys have stepped up in the absence of players for them and I’m anticipating it to be a tough game like most of them in conference play.”

Over Kellogg’s tenure at the helm of UMass, the team has always been predicated on guard-play and fast-break offense. Despite the effectiveness of players like Rashaan Holloway in the post, this incarnation of the Minutemen is no different. Kellogg knows guard-play is crucial come conference tournament time and hopes his players are up to the challenge.

“We need our guards and especially our point guard to be able to play well for five consecutive days and not even that, play consecutive minutes,” Kellogg said. “You just don’t make that many mistakes because I think those mistakes can lead to baskets and kind of put you on your heels some.”

It’s no secret that the odds are heavily against UMass to move through the A-10 tournament and conceivably clinch a spot in the NCAA tournament this weekend, but no matter the result, Kellogg is happy his youthful team is getting this tournament experience.

“As many as you can play, I think is good for the overall morale of the team and the program. But also gives guys experience,” Kellogg said. “The guys don’t really know what to expect and it’s kind of figuring things out on the fly whether it is the travel, the style of play, the places we’ve kind of gone. I think the conference tournament can be a similar building block for guys who have not gone through it before.”

Tip-off is set for 6 p.m., and the winner of Wednesday’s contest will go on to face No. 5 seed St. Bonaventure Thursday.