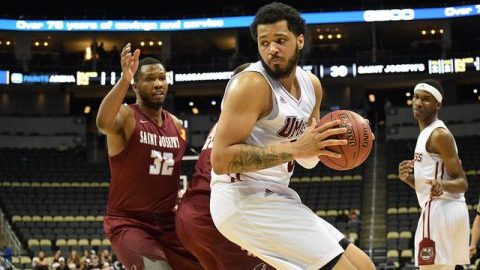 PITTSBURGH — All too often this season, the Massachusetts men’s basketball team has come out strong in the first half, only to lay an egg with inept play in the second.

It happened during UMass’ 88-78 loss to La Salle on Feb. 1, and it happened again less than a week later against Rhode Island. The Minutemen (15-17) found themselves in a similar situation Wednesday night during the first round of the Atlantic 10 tournament against Saint Joseph’s, and this time they wouldn’t let that same fate repeat itself.

UMass received a scare from the pesky Hawks (11-20), as St. Joe’s cut the lead to three in the last 15 seconds of the game. Late free throws and a breakaway dunk for C.J. Anderson helped the Minutemen pull away from the Hawks to win, 70-63. The win advances UMass to the second round of the conference tournament as they will take on St. Bonaventure Thursday afternoon.

The victory might not have come in the way Minutemen coach Derek Kellogg envisioned when UMass was up 19 with less than eight minutes to go in the game. Nevertheless, the coach was happy to advance.

“I’m pretty happy with our team today having to play a tough St. Joe’s team for the third time, come away with a victory that was right down to the end,” Kellogg said following the win. “I thought we played a great stretch in the second half and then they made some great plays to get back in the game. [It was} a well-fought college basketball game. I love the environment out there.”

UMass was paced offensively by Anderson, who scored 17 points on 6-for-7 shooting from the field. Zach Lewis added 14 of his own to eclipse 1,000 points for his collegiate career, while freshman Luwane Pipkins had 13.

It was Pipkins’ effort that made a big difference for the Minutemen’s early second-half surge. After a subpar first half, where his only points were a pair of free throws, the guard turned it on in the second frame, shooting 3-for-4 from behind the arc.

UMass shot just 29.6 percent from 3-point range on the day, but the clutch 3’s in the second half by Pipkins and Anderson-who shot 3-for-4 from long range-played a major role in the Minutemen coming out on top.

UMass has predicated itself on the 3-point shot all season long and with more than half of its 50 shots coming from long range Wednesday, that trend continued.

“I like shooting threes. I like to play faster and make some threes and shoot them,” Kellogg said. “When they go in, it’s much better than playing fast and not have them go in. So seeing Luwane make some and a few of the other guys, it was good. And Zach Lewis was 1-for-7. If he makes a couple of those, I think we’re in better shape.”

For the Hawks, they might have advanced to the next round had it not been for a lackluster shooting performance in the first half, where they shot 7-for-29 from the field. The second half treated St. Joe’s more kindly, as they shot 48.5 percent. Forward James Demery was a catalyst in the second-half surge as the junior scored 14 of his 21 points in the second half. The Williamstown, N.C. native had 11 rebounds to complete the double-double.

Freshman Charlie Brown played solid as well, scoring 14 points and shooting 4-for-7 from behind the arc.

With the Hawks now in the rearview mirror, the Minutemen set their sights on the Bonnies, who they lost to 60-56 last Saturday. For UMass, its main goal from here on out is survival.

“We’re not worried about this game anymore,” guard DeJon Jarreau said. “We just have to worry about St. Bonaventure. We’re going to game plan for them and just try to get this win. Win five in a row.”