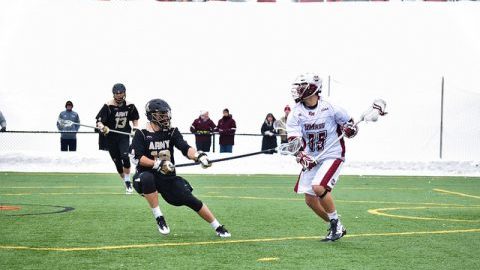 After three straight losses to open up the new season, the Massachusetts lacrosse team’s path does not get any easier as UMass prepares to go on the road to face No. 9 Albany on Wednesday.

The matchup against the Great Danes (1-1) marks the second game against a ranked opponent and the third-straight road game for the Minutemen (0-3) already this season.

“It’s a big game. We’ve had a rocky start but I think we’re ready for it,” junior attacker Buddy Carr said. “Albany’s a very good team, a very complete team too on both sides of the ball, offense and defense. I think we’re going to be ready for them.”

In last year’s matchup, the Minutemen shot the ball 40 times but failed to find the back of the net with any frequency, scoring just four goals with two of them coming in the final five minutes when Albany took out its starting goalie.

UMass ran into a buzz saw when they competed against one of the top goalies in the country, as the Great Danes’ Blaze Riorden tallied 14 saves and allowed two goals during his 55 minutes of action.

“We kind of just made the goalie look good,” Carr said. “He is a very good goalie but he had 20 saves against us. We just didn’t have good shot selection. We had the same amount of shots as them last year but they were just able to put the ball in the net really, that was the difference.”

Carr said the Minutemen made it too easy on Harvard’s goalie last Saturday by putting shots right on his stick rather than testing him with shots into the corners of the cage, which is something he’s hoping to change against Albany.

This year, UMass will likely go up against redshirt junior JD Colarusso in the cage. Colarusso has started in both of Albany’s games this year, allowing 18 goals and tallying 32 saves over two games, a loss to Syracuse and a win over Drexel to open up the season.

“He’s not as big as Blaze, but very quick, quick hands, active in the goal, active out of the goal, good athlete and he’s saving the ball, so good goalie. He’s waited his time too,” head coach Greg Cannella said of Colarusso.

While you might think the Minutemen would like to avenge last year’s 12-goal defeat, Carr said the team isn’t focused on what happened last year.

“I haven’t really thought about that at all to be honest with you; I don’t think any of the guys have either, it’s kind of behind them,” Carr said. “That’s last year, we have a new team this year, and it’s just another game for us coming up tomorrow.”

Cannella echoed Carr’s statements, saying UMass hasn’t talked about last year’s game and the 2017 matchup is the one that matters.

While the Minutemen usually schedule difficult opponents for their non-conference portion of the schedule, the difficulty is ratcheted up to another level because of all the road games.

“I’ve never experienced it actually as a player, this many consecutive road games,” Carr said. “It’s a little different but you’ve just got to go into it with the right mindset, that we’re going to be on the road and they’re going to have home field advantage, but you can’t really let that affect you.”

Despite the difficult schedule, Cannella is still looking to see more from his team when UMass travels away from Amherst.

“We haven’t been very successful at 0-3 and 0-2 in those road games,” Cannella said. “If you’re going to be good during the year, you have to scratch out wins on the road. Hopefully we can play well tomorrow and be good enough to do that.”

Opening faceoff against Albany is scheduled for 3 p.m. at Fallon Field.