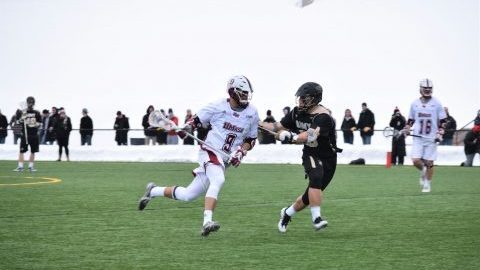 In a seesaw back-and-forth affair at Al-Marzook Field at Alumni Stadium in West Hartford, Connecticut, the Massachusetts men’s lacrosse team flexed its muscles and scored six of the game’s final eight goals of its non-conference contest with Hartford to extend its win streak to three.

Trailing 8-6 minutes into the third quarter, the Minutemen (3-4) rattled off three consecutive goals to close the quarter with a one-goal advantage.

“The guys scratched and clawed throughout the game,” UMass coach Greg Cannella said. “We knew it was going to be tough. Hartford is a very good team. Offensively they have a ton of fire power.”

A fourth quarter long-pole goal from close defender Shane Rinkus, Noah Rak’s bouncing goal following his faceoff win moments later and a game-sealing tally from midfielder Dylan Gruder with 15 seconds remaining in the game gave UMass a 12-10 victory over the Hawks (2-5). The triumph extended the Minutemen’s all-time record against Hartford to 13-1.

Trailing 6-4 entering the third quarter, UMass exchanged a pair of goals with the Hawks as Tyler Bogart and Dan Muller (two goals, assist) netted goals to keep pace with Hartford before closing the game on a 6-2 run. Bogart scored his third straight hat trick with a team-high four points and increased his season-goal total to 15.

“The guys showed composure and just kept at it,” Cannella said. “In the beginning of the game we had a bunch of opportunities to score but just couldn’t. I just said, ‘Hey, keep shooting. Shots are going to fall.’”

Rak won 18-of-24 faceoffs and snagged 10 groundballs, both career-highs for the junior specialist.

After the Hawks pushed its lead to 5-2 with a man-up goal a minute into the second period, Buddy Carr (two goals, assist) and Grant Consoletti (two goals) potted back-to-back goals to pull UMass within one.

Isaac Paparo caused one of his four turnovers and three groundballs in the final minute to set up Gruder’s game-clinching goal with 15 seconds to play.

Muller buried the first tally of the contest into the top-right corner of the cage off a feed from Paul Spinney. Hartford would score the next two before Bogart knotted the score. The Hawks added the next two to take a two-goal edge into the second quarter. Gruder corralled a pair of groundballs in the period.

After failing to score double-digit goals in the first four games of the season, all ending in defeat, the Minutemen have eclipsed the 10-goal mark in their last three victories.

“It’s no coincidence with the results,” Cannella said. “It’s about trying to be consistent throughout and try to share the ball and play hard on that end of the field. We need to continue to be a group that’s willing to scrap it out, play tough and win the close the games.”